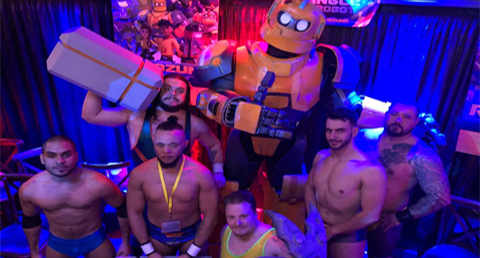 The Robozuna Rumble, held during the February half-term was conceived and delivered by Highlight PR, extending the agency’s recent PR and influencer activity for ITV Studios into experiential events.

Over 100 parenting influencers and their kids, YouTubers Beau’s Toy Farm and Toys Fun Fam, plus the show’s voiceover stars, attended the event at one of London’s most iconic wrestling locations, The Bedford.

Inside the ring, professional wrestlers dressed as Robozuna characters battled it out as kids and parents cheered and waved giant foam fingers. Mangle the robot – an eight-foot costume character provided by Rainbow Productions – presided over all the entertainment. CITV’s Scrambled! filmed the event for broadcast later this month.

After the wrestling, guests could explore three different zones within the venue which allowed them to play with the toy range, which includes action figures, play sets and the new Robozuna Roblox game, and could pose for photos with Mangle, the wrestlers and the voiceover cast.

The event has so far generated more than 240 pieces of digital content and over 800k views across YouTube, Instagram, TikTok, Facebook, Twitter and blog posts. The event’s official videographers captured a 90-second video and social media cut-downs, for organic and paid distribution.

Steve Green, EVP, commented: “Highlight’s brief was to create an experiential event to bring the show to life and drive tune-in and brand awareness. The event was hugely successful, generating a burst of rich content which drove an impressive 19.3% share of boys aged 4-9 years watching the launch. Robozuna continues to be one of CITV’s most successful series.”

Alison Vellacott, director at Highlight PR, added: “The Robozuna Rumble was the perfect platform to showcase our creative storytelling, experiential and influencer partnership skills. It was also a lot of fun to manage.”