Kantar reports toy sales of over £1.7b last Christmas

New data highlights Smyths as a standout performer in terms of toy sales growth although Kantar says narrow margins means it’s all to play for in the fight for market share. 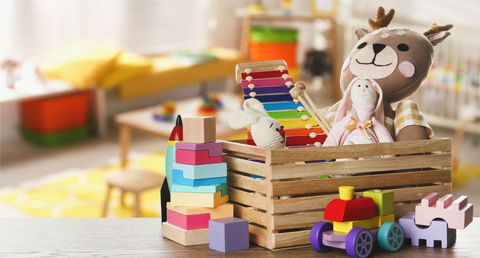 British shoppers spent an additional £19m on toys over the 12 weeks to 26th December 2021, according to new figures from Kantar, an increase of 1.0% on the previous year. Growth was driven by physical stores, up by 16%, while online toy sales declined by 11% as consumers made the most of festive shopping without restrictions. The figures are based on findings from Kantar’s Worldpanel Plus Panel: data fuelled by 105,000 shoppers receipts across physical and online retail in the UK.

Joanna Parman, strategic insights director at Kantar, commented: “The toy market really gathered momentum at the end of 2021. A lockdown-free few months meant shoppers grabbed the chance to hit the shops, and they spent £906m in physical stores, £124m more than in 2020. In-store shopping had a fantastic bounce back in the run up to Christmas in particular.”

As well as the encouraging data from physical stores, Joanna advised that online toy sales remain buoyant. “Digital isn’t going anywhere,” she added. “We saw this clearly in the week of Black Friday when toy sales surged by 124% compared with an average week in 2021. As usual, this was driven primarily by online shopping.  Retailers who can get both channels right stand to make the most impact on shoppers.”

According to Kantar’s figures, Smyths Toys, Amazon and Argos top the table over the 12 weeks to 26th December 2021, with over a third of total toy sales between them. Second only to Amazon, Smyths found growth through a resurgence of footfall in its physical stores while maintaining a strong performance online. Smyths enjoyed the strongest growth of any retailer, earning 1.6 percentage points of market share and securing 11.3% of total value sales.

Joanna added: “The combination of a Black Friday online boom followed quickly by a return to in-store shopping meant Smyths Toys had a real advantage over many of its competitors. It reaped the rewards of having both a streamlined digital presence plus a popular store estate.”

Tesco was also one of the season’s strongest performers, gaining an impressive 10m new toy shoppers in October. “Competition is fierce and a long tail of retailers, including the likes of The Entertainer, TK Maxx and B&M, all claimed similar slices of spend over the final few months of 2021,” continued Joanna. “Narrow margins between different stores means it’s all to play for in the fight for market share.”

While 47% of toy sales over the 12 weeks to 26th December were made online, there is still significant headroom for growth in physical stores and Kantar believes that retailers should prioritise driving footfall in 2022. “Our research shows the enduring appeal of physical shops and highlights just how important a compelling bricks-and-mortar offer remains for the toy sector,” said Joanna. “Despite strong performances from online channels and digital retailers, there’s a clear opportunity for toy stores that can get customers back into their high street shops. It’s likely that shoppers aren’t going to swing between purchasing online or instore, but will establish a more stable balance between the two.” 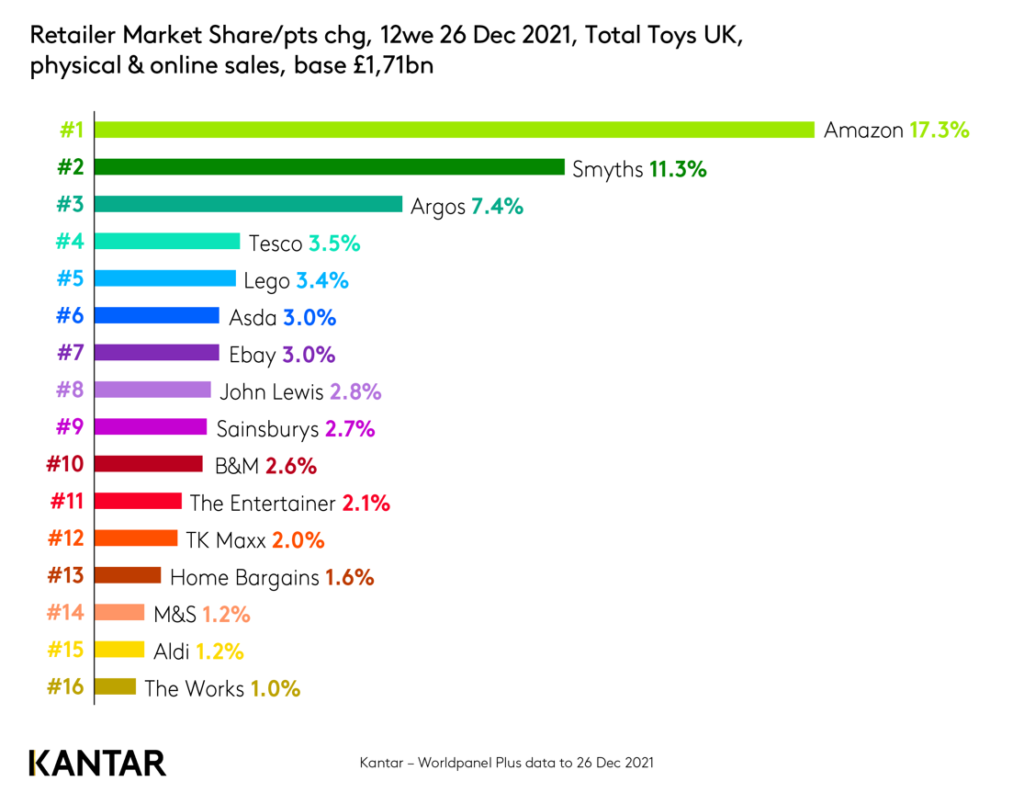