BBC News has reported on how toys have bucked the general retail trend. 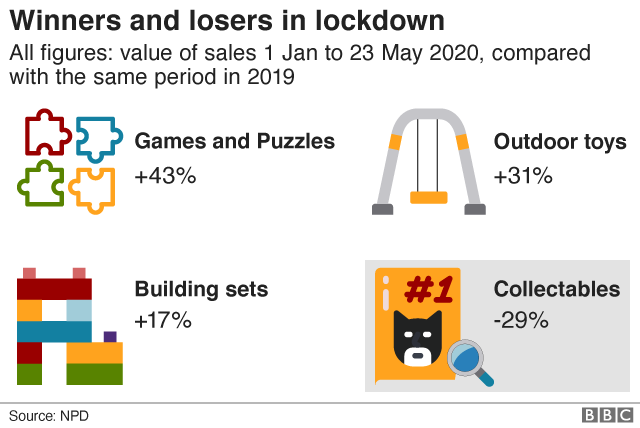 While many non-essential categories have struggled to match traditional sales during lockdown, the UK toy market has proved remarkably resilient. According to NPD, the value of UK toy sales rose by 17% in the two months from the beginning of lockdown compared with the same period last year. While parents and children in the UK have been buying fewer toys, they have been spending more on those they have bought during lockdown – the average purchase price of a toy or game has risen from £8.07 to £9.65.

According to Frederique Tutt, global toy industry expert at NPD, the initial big sellers were games and puzzles “to keep the kids occupied while parents were working.” Games & Puzzles remains the biggest growth category, with sales up 43% in value in the first half of this year compared with the first six months of 2019.

With May turning out to be the sunniest calendar month on record in the UK, demand for outdoor toys soared: the Outdoor category recorded a 31% increase over the same period. However, NPD reports that continental Europe did not experience the same surge in demand: despite similarly good weather, tighter retail restrictions and a less developed online market led many parents to defer spending on toys until the shops reopened.

However, with consumers unable to visit most physical toy stores in the UK, this had an impact on sales of pocket money and impulse items: the amount spent on collectible toys has declined by 29% since the start of the year.

All attention is now on the shops reopening in England on Monday and later in other parts of the UK, and making them a safe place to visit. The BBC report quotes Gary Grant, founder and chairman of The Entertainer, who commented: “We want children to run around our shops. They are toy shops. But at the moment, they can’t, because it has to be safe for customers and staff.” He also appealed to the public to visit stores again: “Do not turn your back on the High Street, otherwise the High Street will be dead. Local retailers stepped up during lockdown, we need to back them up.”

The BBC report also quoted consumer surveys by NPD, which suggest that some shoppers remain cautious about heading back to stores. Four out of five of those polled said they would research toys online before buying them. Click and collect, free delivery and in-store fast lanes at tills are all high on consumers’ wish lists.