The contest has been timed to coincide with National Play Day on 5th August and the National Trust’s Play Week, which is running until 10th August. Open to kids aged 12 and under, the competition asks entrants to create an imaginative and adventurous outdoor scene featuring Lego Bricks and/or Lego Minifigures. Once the scene is created, parents can submit their kid’s creative scenes on Facebook, along with a caption explaining the creative story behind the image, using the hashtag #LEGOYoungExplorer.

Ensuring that the Young Explorer competition is both inclusive and accessible, Lego and the National Trust have stressed that ‘nowhere is too small for a Lego summer adventure’; kids can get creative with their bricks wherever they want, such as in a plant pot on the windowsill, out in the garden, at the local park or at a National Trust location.

The winner will be decided by a panel of expert judges, including celebrity farmer and nature expert JB Gill, Lego Play Agent David Pallash, National Trust play specialist Anita Stevens, and a young ambassador from the National Trust’s Museum of Childhood. The creator responsible for the most imaginative and creative scene will be crowned the Lego Young Explorer for 2020/21. In addition to securing this coveted title and seeing their scene shared on the two brands’ social channels, the winner will also receive a plethora of prizes including a year’s supply of Lego sets, a free 12-month National Trust family membership, and a bundle of National Trust story books. 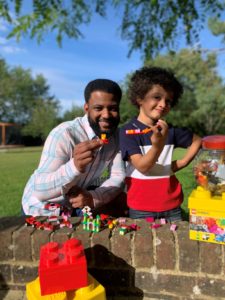 JB Gill will be helping to judge the entries.

To inspire creativity, David Pallash has shared some top tips with entrants. Ideas include utilising the different shades found in nature to ensure the scene is an explosion of colour, and using props such as ice or watering cans to create weather effects. Kids are also encouraged to leave their patch of nature exactly as they found it by taking home their Lego bricks and anything else used to create the scene.

JB Gill, Lego Young Explorer ambassador, adds: “The summer holidays should be filled with fun. That’s why a play-cation, whether it’s in your back garden, a local park or a National Trust place, is a brilliant excuse to grab some Lego bricks, fire up your imagination and get creative in the great outdoors. As a farmer, a lover of the great outdoors and as a parent myself, I know just how important it is to explore nature as a family; there’s no better time than summer to do this.”