At the London festival kids can create their own fantastical football teams and have their photo taken with a replica of the UEFA Women’s Euro 2022 trophy. 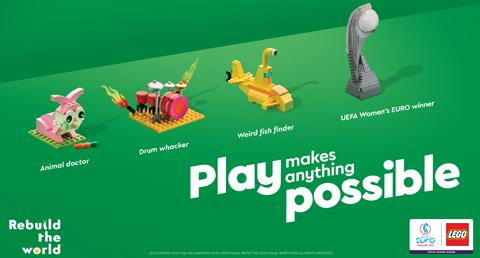 As part of its national sponsorship of the UEFA Women’s Euro 2022 tournament, the Lego Group is bringing Fantastical Football to the London Fan Festival in Trafalgar Square from Saturday 23rd to Sunday 31st July.

The Lego Group’s zone at the festival will replace rules with pure imagination; kids will be able to create their own fantastical 5-a-side football team, replacing players with foxes, cacti, pirate queens and more, all with different skills and characteristics before getting hands on with Lego bricks for fun build challenges, such as building their own fantastical vehicle for transporting their team to matches or creating a Lego trophy.

They will even be given the opportunity to have a photo taken with a a life-size replica of the UEFA Women’s Euro 2022 trophy.

Over nine days, Trafalgar Square will welcome fans and friends of all ages, from home and abroad, to be a part of the biggest ever European women’s sport event. The festival is free and will be open daily between 11am and 6pm.

The Fan Party offers a packed programme of other activities including a pop-up football pitch where fans can watch exhibition games and take part in coaching sessions; live panel discussions, interviews and music; live screenings of the tournament final match and box-office hit Bend It Like Beckham; food and drink stalls offering a wide variety of cuisines; and official Women’s Euro 2022 merchandise.