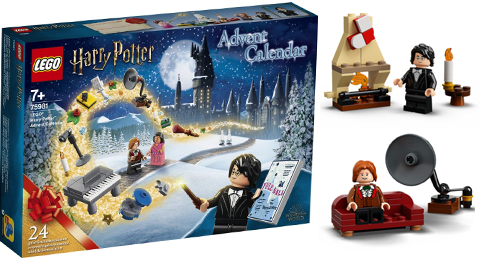 The Harry Potter calendar lets fans of the Wizarding World count down to the big day – and the fabulous Yule Ball. Collectible figures and minifigures include Harry Potter, Hermione Granger, Ron Weasley, Padma Patil, Parvati Patil and Cho Chang, plus other builds such as the miniature Beauxbaton’s carriage are also waiting to be revealed. Many of the calendar’s contents will also complement Lego’s extensive range of Harry Potter play sets.

Star Wars fans, meanwhile, can collect an assortment of figures with a festive twist. The 12 characters, including Darth Vader (complete with a Christmas jumper) and D-O (sporting a Santa hat), are accompanied by 12 mini builds plus a foldout playmat. Featuring an image of the Millennium Falcon decked out with Christmas lights, the calendar and its contents will inspire creative play.

Offering three themes to enjoy – Emma’s room, Santa’s toy workshop and winter wonderland – the Friends calendar lets kids progress through each setting, building excitement as the Christmas countdown gets nearer to the big day. Fun accessories include a snowball launcher and a skateboard, which can be discovered alongside Friends minifigures.