As part of its Rebuild the World campaign, The Lego Group has teamed up with Alesha Dixon to bring kids’ impressive Lego creations to life. 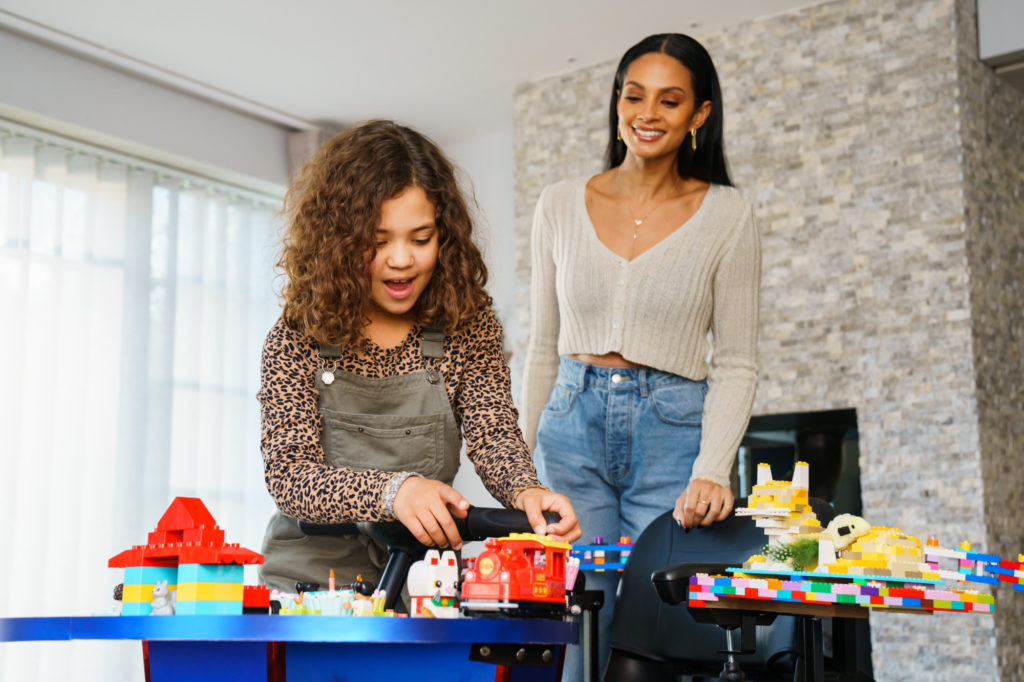 Amelie and Alesha Dixon check out the finished mobility scooter.

The Lego Group has joined forces with mum and pop royalty Alesha Dixon to celebrate children’s creativity and problem-solving skills by showcasing how children can use the power of play to rebuild the world around them.

Alesha and Lego asked children how they would use Lego bricks to solve a problem faced by their friends or family. Ideas received included a book stand to help a grandad hold his reading book and a night light to help kids see in the dark.

The Lego team was particularly impressed with 8-year-old Amelie’s creative idea, who used Lego bricks to show how she would revamp her grandmother’s mobility scooter, making it more fun for her to use and helping her enjoy the things she loves. Inspired by her grandmother’s passion for cooking and animals, Amelie’s Lego design contained exciting features including a cat grooming stand and a cake serving mechanism, as well as music and photos of family and friends.

Amelie’s design was brought to life by a team of inventors and presented to her by Alesha, as seen in new ‘Inspiring Lego Inventions’ video content (viewable below). This activity forms part of the Lego Group’s ‘Rebuild the World’ campaign, which celebrates the creativity of children, inspires them to imagine a better world and shows how Lego play helps them develop the skills they need to be successful in it.

Alesha said: “We worked with an amazing team of inventors to look closely at Amelie’s Lego build and think about how we could best bring it to life. Amelie’s Lego creation was full of little personal touches and details, so it was important that we kept those elements and brought them through to the final design. I was so impressed by Amelie’s creativity, and it was great to see her invention brought to life.”

To find out more about the Lego Group’s Rebuild the World campaign, visit: Lego.com/Rebuild-the-World.