The 2020 launch of Magic Box’s new range features 80 characters to collect as well as 24 Secret Spies with a colour changing feature. 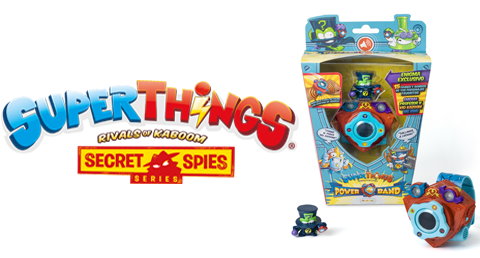 Magic Box Toys has announced the launch of all new SuperThings Secret Spies Series. The new series taps into the ever-popular ‘hero vs villain’ format and uses everyday objects and food as collectible characters. There are 80 characters to collect as well as 24 Secret Spies which have a colour changing feature; kids simply pop them in warm water to discover the true identity of each spy. The Ultra Rare Oculus Max is also shielded in disguise – only when he’s found is his true identity revealed. Kids can also look out for two Super Rare Gold Finish characters, Hardlock and Lord Torch.

Eight Secret Hideouts are available to collect, with an RRP of £3 each. The secret password on each Hideout must be cracked in order to unlock it, and Hideouts can be stacked together to create the ultimate lair.

Spy Jets, including Bite Boat and Monster Bike, are the chosen modes of transport for the eight new characters. Also included in the Spies Series is a £5 starter pack and a £5 Megapack, offering four characters and a Secret Hideout.

The 2020 launch will also see playsets as part of the line-up. SuperHeroes HQ includes fun interaction and moveable parts, plus the official SuperThings Truck. The Power Band includes an exclusive Enigma figure. Two fully interactive vehicles complete the toy line – Kid Kazoom and Kid Fury. Choose between battle mode, where spinning weapons are released for ringside rivalry or flying mode to attack from above. Each vehicle is fully equipped with weapons to fire.

“We have been fortunate enough to see continuous growth this year – both SuperZings and Mojipops have been gone from strength to strength even during the pandemic and we know the appetite for collectibles is only growing,” commented Julia Cake of Magic Box Toys. “Our latest SuperThings launch promises to be our best yet with a heavyweight TV advertising campaign planned from launch, plus cinema advertising aligning with re-openings. We have also embarked on a partnership with Luna Cinema and their summer ‘drive in’ format for sampling and giveaways, plus sampling at socially distanced family festivals and as ever, a strong PR programme which includes influencer marketing and partnerships with children’s media.”