Little Tikes has enlisted the father and son to spearhead its latest campaign for the My Real Jam range of instruments for children. 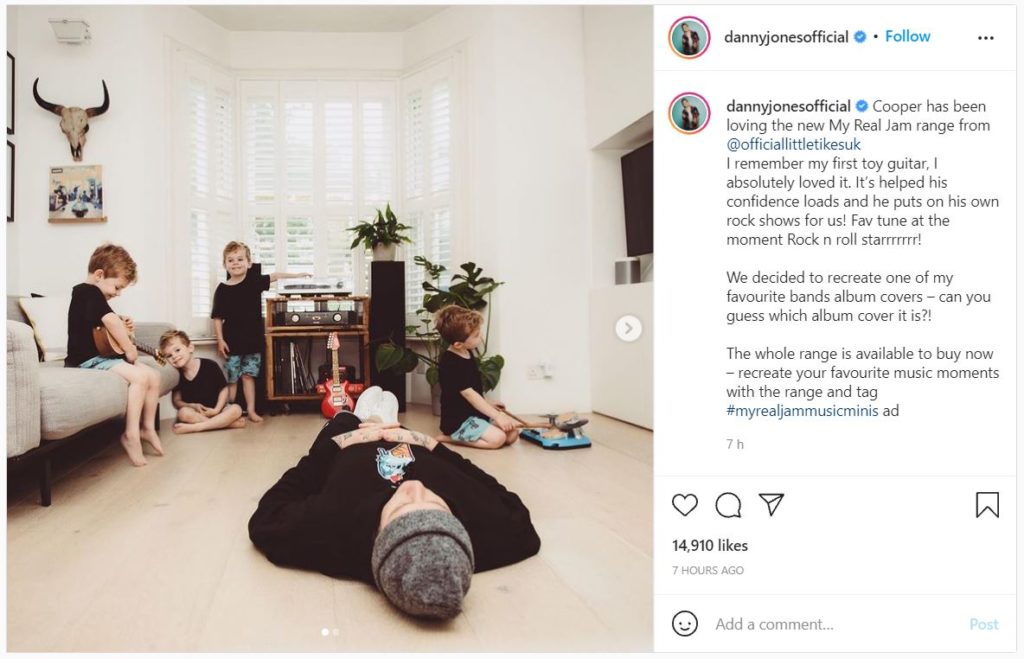 Danny Jones was just 17 when he shot to fame with McFly, but his son Cooper has been called into the limelight by Little Tikes at only three years old, as he and his dad lead the brand’s #MyRealJamMusicMinis campaign.

The My Real Jam range includes My Real Jam DJ Table, Electric Guitar, Keyboard, Acoustic Guitar and Drums. All of the items in the new range come with packaging that doubles up as a case for the instrument, so that little ones can take it on the road with them and perform a concert wherever they go.

Taking to Instagram to share the photo, Danny said: “Cooper just loves the new My Real Jam collection from Little Tikes. Jamming with him at home on all the different toys is so much fun, and it’s great seeing him get excited about music and rocking out with his friends. It reminds me of how I was when I was little.”

Little Tikes and Danny Jones are calling on all parents and caregivers to share pictures of their own children recreating classic images from rock and pop archives. Pictures shared under the hashtag #MyRealJamMusicMinis are in with a chance of winning one of five My Real Jam bundles.

One of the first mini rock stars to join the campaign is three-year-old Isaac Kearney, who recently went viral for recreating In The Air Tonight by Phil Collins. Melissa Kearney, Isaacs’s mum, said: “Isaac is a little rock star in the making so it’s been a joy seeing him in his element and rocking out with the My Real Jam range.”

Other entries include a hilarious KISS remake, complete with iconic face paint and a keyboard-playing pooch, a mini Freddie Mercury with an unmistakable moustache and vest combination, and prince-size version of the king of rock ‘n roll himself, Elvis.

The brand has also recruited a raft of influencers to join in the campaign, flooding social feeds with campaign content in the coming days and weeks. Additionally, social content for the brand channels has gone live matching musical instruments in the range to fun characteristics, so parents can see which member of the band their little one is destined to become, alongside lots of other fun activity to celebrate magical music moments.

Michelle Lilley, head of marketing UK for Little Tikes, said: “Danny and Cooper clearly had a blast bringing rock history to life. The album cover is an iconic moment in musical history, and it is great fun to see Danny and Cooper recreate it together in pint-sized form. Musical play ticks all the boxes for playtime fun, it’s creative, exciting, and there’s an element of roleplay that young children love. What’s more, it encourages brain development, self-confidence, and could spark a lifelong passion.”

“We’re hoping to see more families take on the challenge of creating their own #MyRealJamMusicMinis scenes. We’re sure the pictures will live long in family albums, just like the originals have stood the test of time in rock and pop history.”