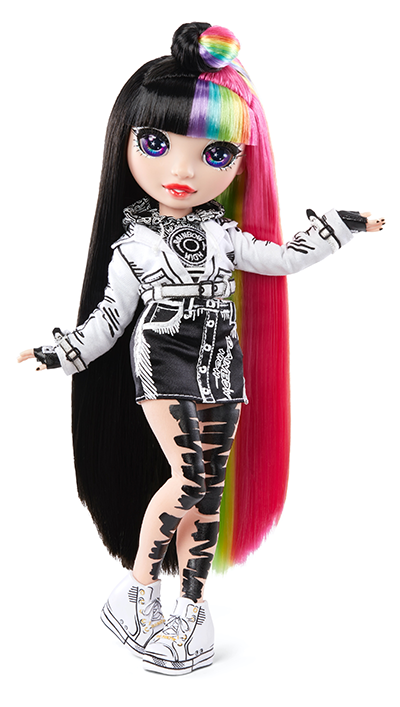 Rainbow High from MGA Entertainment has announced that it is expanding its collections for autumn 2021.

Series 3 Fashion Dolls will introduce six new dolls to the collection. Each doll has its own hair colour, including shades of rose, peach marigold, mint, ice and orchid, to reflect the colours of the rainbow, as well as a personality and talent such as fashion design, performing arts or textile design.

MGA Entertainment is also introducing its Winter Break Fashion Dolls range this month. Featuring the popular characters from Series 1, the six new winter dolls are ready to hit the slopes along with skis or a snowboard and accessories including beanie hats, cocoa cups and more.

Rainbow High will also introduce the official designer collector doll, Jett Dawson. This one-of-a-kind fashion doll has half a head of long jet black hair, while the other half is the colour of the rainbow. Unlike the other dolls in the series, Jett Dawson arrives with a spectacular gown and her year of release is etched into the tailor’s dummy. The doll also comes with extra accessories that reflect her rare double talent of fashion and textile design, including a mini sewing machine, a Rainbow High storage trunk for the machine, and a trunk for her shoes.

The fashion doll brand is also launching its first ever special edition doll. Exclusive to Smyths, the Kia Hart Doll is fully articulated and comes with two outfits and stand-out multicoloured hair. The doll also features acrylic eyes and lashes.

In addition to the new dolls, Rainbow High will launch its first car this season, the 8-in-1 Colour Change Car. Fans of the brand can expand their collection with this sporty 2-seater convertible. Boasting LED colour changing lights and working wheels, the car lets the dolls ride in style to the Rainbow High Academy.

The animated content series also continues to be hugely successful on the Rainbow High Instagram and YouTube channels, with over 40m views to date. Series 2 launched in July on YouTube and the second Series 1 Feature Length launches on Netflix in August.

MGA Entertainment will support the launch of the new lines with a heavyweight PR and marketing campaign, including influencer and celebrity engagement, social media activity and TV.