The video bemoans the rules that allow consumers to purchase non-essential products at retailers designated as ‘essential’ by the government. 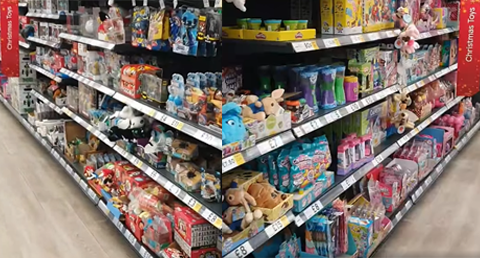 Frustration is building across the independent retail community at what they perceive as major inconsistencies in the current lockdown rules in England. While independent retailers deemed as ‘non-essential’ have been forced to close, many major stores have been designated as ‘essential’ retailers and are therefore legally allowed to stay open and continue to sell goods, both essential and non-essential. The fact that consumers can buy exactly the same products in these stores that they have been stopped from buying at the shuttered specialist shops has inevitably rankled with many independent store owners

A video made by Midco Toys owner Dave Middleton earlier this week encapsulates the frustration felt by many specialist retailers in the toy community. In the video, which can be viewed below, Burton-based Dave wanders the aisles of his local Tesco, lamenting the fact all the specialist toy retailers across England have been forced to close during their peak selling-season, while retailers “such as Tesco, B&M and Home Bargains” are all open. He goes on to ask what the difference is between walking down the toy aisle in Tesco, and walking down the aisles of his own shop, observing: “Why can I not catch coronavirus in Tesco, but I can catch it in my own shop? It’s not fair.”

He goes on to implore people to support their local toy shops and other independent retailers, rather than chain stores which he alleges “are finding loopholes in the essential retailer rules and regulations.”

Conversely, only a few weeks ago, we saw consumer frustration at the lockdown regulations boiling over, after a customer was arrested in a supermarket in Wales for pulling down signage that had been put in place to stop consumers from shopping in the ‘non-essential’ aisles of his supermarket. His argument was that if the store was open, he should be able to buy what he liked.

Speaking to Dave earlier this week, he admitted: “It’s so frustrating and annoying. I can’t believe that Ryman’s was open this morning – what is so essential about a marker pen?” His frustration will be felt by many other toy shop owners.

Watch the video below.