Following a month-long vote, the fan favourite will return to the Monopoly board game but the T-Rex will become extinct. 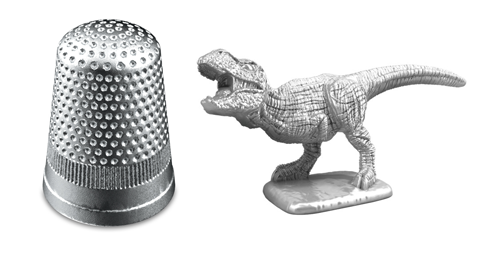 Monopoly fans have voted for the Thimble to return to the board after Hasbro asked players to vote for their favourite throwback tokens as part of a game refresh.

Following the month-long vote in the MONOPOLY Throwback Token Vote campaign, and to make way for the sewing companion’s return, the current T-Rex token will head into extinction this summer.

In the worldwide call-to-action, fans had a chance to vote one of the current tokens out and bring back one of the six retired iconic tokens, popularised in the 1990s, in the next generation of the Monopoly game – Thimble, Wheelbarrow, Iron, Boot, Horse & Rider, or Money Bag. The Thimble secured 30% of the votes. In 2017’s fan vote, the Thimble, Wheelbarrow, and Boot were retired and replaced by the Penguin, T-Rex, and Rubber Ducky. While the result was close, the T-Rex received the most votes to leave the game by 30%.

Hasbro will begin to replace the T-Rex with the Thimble token, so those who want to continue to play with the T-Rex and the seven other current tokens have a limited time to pick up the existing version of the game. The refreshed version of the Monopoly board game featuring the Thimble alongside the Scottie, Battleship, Racecar, Top Hat, Penguin, Hazel, and Rubber Ducky tokens will hit shelves this autumn in the US and in spring 2023 globally.

Monopoly is the world’s favourite family game brand and is enjoyed by more than 1b players in 114 countries across the globe. Fans can engage with the Monopoly brand across many platforms and formats including live events, fashion licensing, digital gaming, casino gambling and more.