Moose posted phenomenal 78% growth over the previous year and was the second fastest-growing manufacturer in the UK. 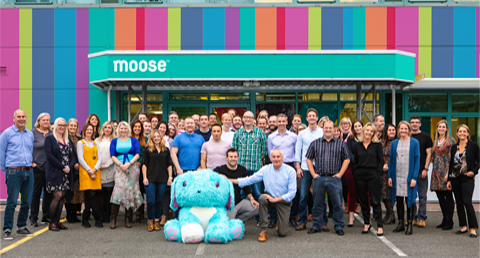 It is just over a year since the UK office began to operate as Moose Toys, and things could hardly have gone better for the company over the past twelve months: Moose Toys was acknowledged as one of the fastest growing companies, posting a phenomenal 78% growth over the previous year. This stellar performance saw Moose Toys become the second fastest-growing manufacturer in the UK across the whole of 2019.

Things were even better at the business end of the year; December saw Moose growing by 104% to reach the number 18 slot in the top 20 manufacturers, while January saw the company continue that climb with an increase of 97% to take the number 16 position.

This success was driven by a highly-focused portfolio, consisting of a combination of established brands and the new launches: Scruff-a-Luvs, in its second year, continued to be one of the best-selling toys in the UK toy market by value, whilst new launch KindiKids became the fourth best-selling new toy property.

Just over one year on from the initial acquisition of Worlds Apart by Moose Toys, and the subsequent fusing of the organisations, Toy World caught up with the European sales and marketing director Emily Maclennan and CEO UK Neil Shinner, to find out how the company has fared since the merger.

“It has been a very exciting first 12 months, we are delighted with the progress we have made in such a short space of time,” Emily Maclennan, European sales and marketing director, told Toy World. “Moose has been hugely supportive of the European operation, investing significantly in people, marketing and infrastructure. A key focus for the company is the creative development into new category areas. Moose is well-known for being a leader in the collectibles sector, and with the imminent launch of Oh! My Gif, this remains a core growth category for us. However, Moose’s development into the pre-school market with KindiKids has been an incredible success, achieving a top four spot on launch, which was a fantastic accomplishment.”

Neil Shinner, CEO UK, added: “After a phenomenal year, during which Moose Toys UK leapt into the top NPD manufacturers list after launching only four new brands in the UK, we’re already well into the next phase of our evolution. We have ambitious plans for 2020 onwards – we continue to innovate in multiple categories, with several new ranges to be excited about in 2020. I’m confident this year will see Moose and its partners continue to grow significantly.”

To read the full interview, which appeared in the March edition of Toy World, click here.