Week two of lockdown – or is it? I lose track of just about everything at the moment. Anyway, I hope you are all living your best pandemic lives. It’s all slightly surreal: we appear to have reached the part of the apocalypse where goats have taken over parts of North Wales – I hope our Welsh readers are enjoying their new goat overlords. Maybe Welsh mountain goats will be next year’s Llamas/ Unicorns?

April Fools’ Day was officially cancelled: few brands were brave enough to risk getting the tone wrong. We’re all learning new words every day; who understood what ‘furlough’ meant a month ago? An awful lot of people have suddenly become very familiar with the term. And who knew there was such a thing as a Bat Virologist? Certainly not me, until Goldieblox announced that it would be live-streaming a Q&A with one this week, to help kids understand the role that bats have played in the current situation.

Amazon delivery drivers are all in line for knighthoods; we are going to arrange a clap for them in our street next week, some time between 9.00 am and 6.00 pm. Numerous pop-up home schools have already been placed into Special Measures by Ofsted. Baby Shark has reworked its classic theme song, with new words which encourage kids to wash their hands (doo doo doo doo doo) – as if parents haven’t suffered enough over the past few weeks. And any Disney fans who have watched Tangled for the first time this week will be freaked out to learn that the ultimate lockdown heroine lived in the kingdom of Corona….what do you have to say about that, conspiracy theorists?!

Around us, the toy landscape is already changing – pandemic life comes at you fast. Jazwares has acquired plush supplier Kellytoy; Harper Collins has acquired the book division of Egmont and The Sales Partnership has been placed into administration, having failed in its search to find a buyer for the business. US indie trade show ASTRA has been cancelled – I loved the line in the statement which said that all monies, including (and I quote) “tickets for the Lip Sync Battle” will be refunded. Now that is one brilliant idea for the next Toymaster show, whenever it might take place; I would pay good money to see a Lip Sync Battle between Ian Edmunds, Steve Kerrison and Dave Middleton. It helps to have something to look forward to in these uncertain times.

The landscape will undoubtedly change a lot more over the coming weeks. A network of accountants has predicted that 20% of small and medium-sized UK businesses will run out of cash over the next four weeks. Or to put it another way, between 800,000 and 1 million companies are at risk. I’m sorry if that is stark, but I am not a politician; it’s not my job to sugar coat the reality of the situation.

Of course, there are mitigating factors; one indie toy retailer told me this week that he has been working harder than ever – 16 days straight – taking and delivering online orders. In his words, “the internet has gone crazy – it’s on a par with Christmas.” Dedicated online retailers are inevitably reaping the rewards, as are grocers – and crucially Argos, which rather fortuitously has outlets in Sainsbury’s stores, and thus can remain open for business when other general merchandise retailers have been forced to close. However, realistically, these accounts can’t shift the volume of product that a fully operational toy retail channel would be turning over, despite what some rather optimistic media articles have claimed this week (the Forbes story in particular made it sound as though we are in a golden era for toy sales, rather than the ‘making the best of a tricky situation’ reality).

There are well-documented bright spots; games & puzzles, art & craft, construction and some outdoor suppliers are enjoying a welcome sales boost. At the same time, many retailers across the globe are postponing or cancelling orders and deliveries, largely as a result of uncertainty and an inability to plan beyond the immediate future. Some are asking for (hugely) extended credit terms for gear which has already been delivered – and in many cases, presumably sold. As one supplier pointed out, retailers have the same grants and furlough opportunities as suppliers – and toy companies still have bills to pay, staff to look after and suppliers of their own which they owe money to (as do those suppliers….the chain is a long one). Some tense stand-offs are developing; shopping centres are threatening tenants with legal action over unpaid rents, while negotiations between retailers and suppliers are at a delicate stage.

Regardless of how these conversations ultimately play out, there is one key objective on all sides: to still be standing when we come through to the other side – to paraphrase our dear leader, “whatever it takes.” There are clearly some hugely resourceful people within the toy community; we’ve seen that in the way they have adapted their traditional business models to make the most of the business opportunities that exist. And we’ve seen it in the way toy companies have stepped up to help by providing medical equipment and supplies to front line workers.

Naturally, the epidemic is having a knock-on effect throughout the supply chain, all the way back to Chinese factories – just as they started to emerge from their own period of lockdown and get back up to speed, their revival has temporarily been halted in its tracks. We’ll have more on that story early next week, so keep a look out for it.

We’re doing our best to keep everyone up to date with all the key developments in this ever-evolving landscape. I won’t pretend it is easy, but like retailers, we are adapting as best we can. So it was nice to receive an email this week which said: “As a reader it is easy to be flippant and claim that most of the content of toy industry magazines consists of re-hashed press releases, but that is not a criticism that can be made of your publication in these unprecedented times. Toy World is keeping us abreast of the issues that matter to the toy industry with balanced and unbiased reporting.” I am sure that gave our editorial team a nice morale boost – it’s certainly not hurting that many people have a little more time on their hands than they normally would to read magazines and email newsletters.

Indeed, if you have a few minutes spare today, you can treat yourself to a read of our April issue – the digital version can be viewed here. It includes a timely feature on the games & puzzles sector, as well as articles on subjects as varied as how to get your social media strategy right and the growing kidult market. I bet a fair few of the toys being sold online right now are not just to keep kids amused during lockdown…adults need to be kept occupied too.

Finally, to help keep you amused during your next video conference session, here is a handy ‘Conference Call Bingo’ game: 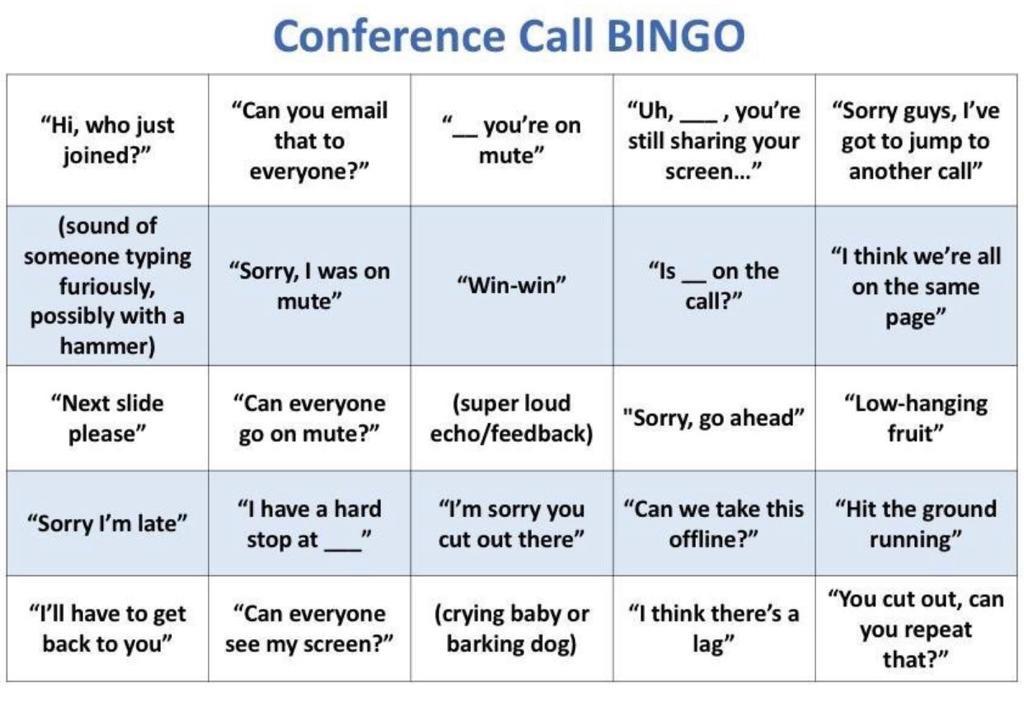