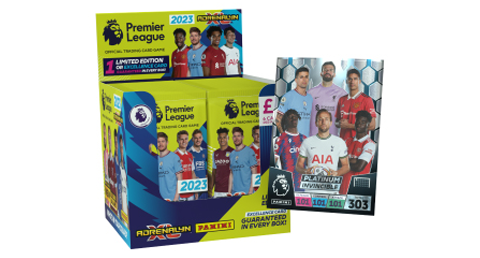 Panini says the new offering for the 2022/23 season is bigger, better and more exciting than ever before with fresh facts and content, giving collectors new ways to play and collect.

Premier League Adrenalyn XL 2023 hits shelves on 4th August and the market-leading football trading card game has been udpated to include extra sets and rare cards, raising the bar to bring collectors more must-have cards than ever this season.

New sets for this year include Electric cards, featuring the Premier League’s most rapid players, and Top Finishers. Plus, collectors can look out for the best players from the international scene in the World Class category and there will be eight new Golden Ballers to track down. For fans of rare cards, there are printed and real autograph cards from both current and legend PL players to find, marking the 30th year of the Premier League. Collectors can also hunt down the brand new Excellence limited edition cards, featuring only the very best players from the Premier League.

This season, Panini has packed the collection with more game detail than ever, including each player’s preferred positions featured on the back of their card, putting collectors at the heart of the Premier League.

Chris Clover, managing director for Panini UK, said: “The UK and Ireland’s top-selling football trading card brand is back for the new season and better than ever. Premier League Adrenalyn XL 2023 will once again be the collection of choice for all fans of the Premier League and boasts an incredible array of new special and rare cards, all designed by the best in the business.”

The collection will be supported by a multimedia marketing campaign across TV, social and print media. Cover-mount and sampling promotions are also set to put Premier League Adrenalyn XL into the hands of more footie fans than ever before.