The naturalist and presenter Nick Baker delivered pupils a talk about bugs and how to look out for them during the holiday.

Nick Baker, the well-known TV presenter and host of some of the UK’s best-loved wildlife programmes, including BBC’s The Really Wild Show and Springwatch Unsprung, has presented Suhaan, a Year 4 pupil from Warrender Primary School, with the winners’ certificate for the insect he entered in PlayMonster’s My Living World ‘Design a Bug’ competition. Suhaan’s was selected from over 800 creative entries sent in by primary pupils in the national competition, which ran this spring/summer.

Nick Baker visited Warrender Primary School to give a talk to pupils about the natural world, life as a naturalist and all the bugs, creatures, and animals he has seen, as well as information on how to look out for them during the summer holidays. He also presented Suhaan with a selection of My Living World kits for himself and his school.

Nick then opened Warrender Primary School’s new activity trail. Created with wood and natural materials, students pointed out ants and insects that had taken residency in the trail and Nick explained interesting facts about them.

Nick Baker commented: “I was really pleased to present Suhaan with the winning certificate for his incredible Design a Bug entry. It has parts of a stag beetle, a scorpion and other elements incorporated. Warrender Primary School’s new activity trail is a fantastic learning space and they have created it from natural materials, so insects can make a home there too. It’s the perfect place to find bugs for the My Living World kits the school has won.” 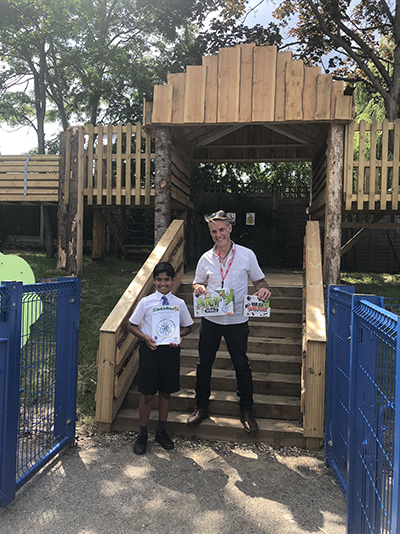 Helen Brown, deputy head, Warrender Primary School, added: “We were elated to hear that Suhaan had received first prize for his design. All the staff and children at Warrender are proud of his achievement. Our school learning motto is working together; we A.S.P.I.R.E and Suhaan has done just this – he has achieved, supported, taken pride, inspired, respected and enjoyed being part of this competition. A huge thank you to Nick Baker for presenting him with his prize and for opening our new play trail. Through his conversations, he has inspired us to explore and care for our natural world.”

Launched by My Living World and the award-winning website KiddyCharts, the Design a Bug competition asked pupils to create their own weird and wonderful insects, inspired by creatures they’ve seen in the school playground or local park. Over 230 primary schools also received free Ant World and Worm World sets with STEM Learning Packs.