The series will debut with a holiday special in December, followed by premieres across Nickelodeon’s pre-school platforms in spring 2021. 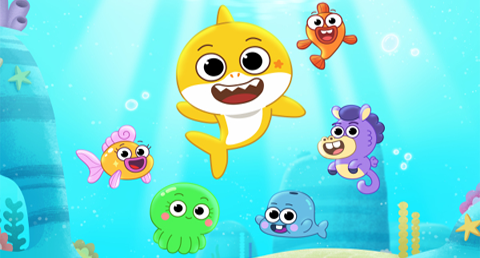 Nickelodeon has confirmed a new animated pre-school series based on the viral Baby Shark video.

The network has given the green light for 26 half-hour episodes of Baby Shark’s Big Show (working title), a 2D-animated series which will follow Baby Shark and his best friend William as they journey on fun-filled comedic adventures in their community of Carnivore Cove, meet new friends and sing original tunes along the way.

Baby Shark’s Big Show is being co-produced by Nickelodeon Animation Studio and SmartStudy, the entertainment company behind children’s brand Pinkfong which produced the original video.

The original Baby Shark video is now nearing the 5.8b view mark on YouTube and still stands as the second most-viewed video in the platform’s history.

“Having the opportunity to dive deeper into this incredible world and create all-new story lines has been extremely exciting, and our head of preschool Eryk Casemiro and his team can’t wait to help grow the Baby Shark universe and fan base with an amazing new series that captures the heart and spirit of this beloved property,” said Ramsey Naito, executive vice president of production and development at Nickelodeon Animation.

Nickelodeon will debut the series with a holiday special in December, with premieres rolling out across its pre-school platforms in spring 2021. Following the US launch, the series will also roll out on Nickelodeon and Nick Jr. channels internationally.