Mirroring the category’s strong performance in the UK, Plush had the largest dollar gain, with Squishmallows, Magic Mixies and Disney All Other as the main drivers of growth.

The NPD Group has revealed that US toy industry dollar sales increased by +1% or +$63m from January-April 2022. The latest data to be released shows unit sales declined 6% and the average sale price of $11.17 increased +7% during the period. Looking at the three-year compound annual growth rate from 2019 to 2022, toy industry dollars grew 13% year-over-year, driven by ASP growth of 11%, while units were up 1% over that period. 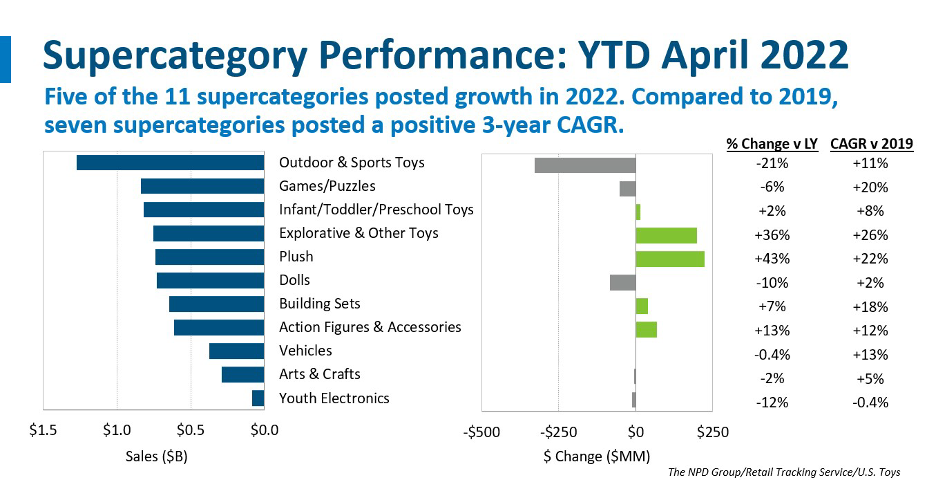 Five of the 11 supercategories tracked by NPD have posted growth so far in 2022. Outdoor & Sports Toys continues to be the largest supercategory, with $1.3b in sales, while Plush had the largest dollar gain of $223m and the fastest dollar growth of +43%. The data also shows that when looking at compound annual growth rates compared to 2019, Explorative & Other Toys had the fastest growth of +26% followed by Plush at +22%. All told, seven supercategories posted a double-digit CAGR versus 2019.

“While the US toy industry dollar growth slowed to 1% YTD April, this was on top of unprecedented dollar growth of 28% in the same period last year with two stimulus checks lining the pockets of some consumers,” said Juli Lennett, US toy industry advisor. “The decline in units was not unexpected. The strong increase in average selling prices for the third year in a row was unexpected and drove the growth over last year.”

Notable drivers of change for each supercategory include Plush, which had the largest dollar gain, while Squishmallows, Magic Mixies and Disney All Other were also main drivers of growth. Squishmallows had eight of the top 15 selling toys for the total toy industry. Explorative & Other Toys grew 36%, with NBA and NFL dominating the growth in the category. This was followed by Disney All Other and 5 Surprise which, combined, resulted in the No. 1 selling toy in the supercategory. Action Figures & Accessories also grew double-digits: Funko Pop enjoyed the largest growth, followed by DC Universe and Marvel Universe. Building Sets was up 7%. Lego Star Wars posted the largest growth, followed by Lego Creator Expert and DC Universe.

“Although we are in the middle of a challenging economic cycle, parents will not miss important occasions to buy toys for their children,” added Juli. “However, we might see some consumers trading down or looking for sales to get those toys.”