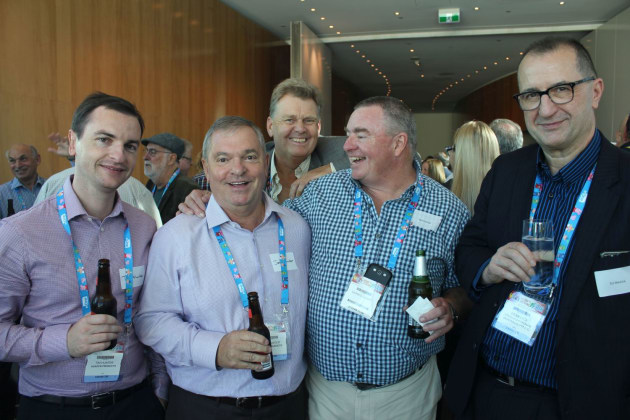 Jeff, second from left, enjoying a trade event with friends and colleagues.

Jeff was a hugely popular, larger-than-life character who was always seen at global toy industry shows and social events in Hong Kong, London, Nuremberg and many other places around the globe.

“As many of you know, we lost our Dad, the greatest salesman, Jeff Hunter on Thursday at 12.30am. He was surrounded by the six of us, as he would have wanted. Dad could sell ice to the eskimos and he got the biggest buzz when he got the order. He was a big kid and he just loved toys.

Dad, we will ‘never never never give up’ and we will ‘sell, sell, sell’ and get that massive hit we always talked about – I promise you that. Rest in Peace Dad, your bubbly energy and enthusiasm will live on inside us all every day.”

MGA’s Isaac Larian referred to Jeff as “a legend in our industry”, while Richard North added the following tribute to Jeff: “For those who don’t know Jeff, he would light up any room he entered and leave it brighter than when he walked in. For those who did know Jeff, they will know he was always laughing and his stories were legendary and often carried words of wisdom. I know he would be proud to know that I’ve forgotten most of them simply because by the morning of any night out with Jeff and Jimbo, my head would hurt and my memory had gone. God bless you Jeff and your fantastic kids, who take the business forward in your amazing spirit and honour.”

Golden Bear’s Barry Hughes response was typical of the overwhelming number of comments that were posted after the news was shared on social media: “Thinking of James and the rest of the Hunter family. Your Dad always made me smile every time I saw him. He will be greatly missed by many people around the world.”