The online toy retailer and distributor has grown its workforce to 31 and its turnover from £5m to £13m over the last few years. 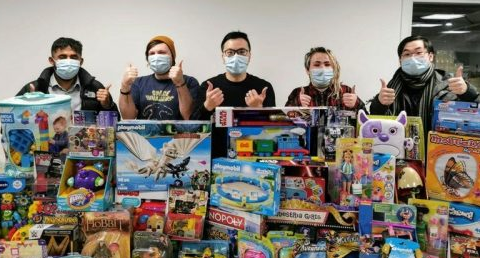 Maqio started as an online retailer in 2010 and opened its first physical toy store in 2011. Within a year, online sales had grown so much the company made the decision to close its physical shop and focus purely on online. For the first few years, the focus was on building relationships with suppliers rather than the Maqio brand. Since then, the retailer has continued to grow, and is now predominantly a branded discount/value online retailer with a large focus on toys. At the end of 2018, a dedicated toy website was launched – www.maqio.com.

The company has now more than doubled its warehouse space after signing a new lease in Milnrow, Rochdale. Maqio’s current warehouse in Middleton is 48,000 sq ft, but the new premises will add 103,000 sq ft to its warehouse capacity.

The new site is expected to be fully operational in February 2022 and is the result of a 12-month search for the right property.

“We have really good staff and were determined to stay in Rochdale so took our  time in finding the right space,” commented managing director Edmund Lim. “Rochdale Borough Council and Rochdale Development Agency have been really supportive of us since we moved here in 2017 and that was another reason why we were determined to stay. Our new warehouse is only a 12-minute drive from our existing base in Middleton, which is very important to our staff.”

Maqio Toys has been a big donor to Rochdale Council’s Christmas Toy Appeal, which is just one example of the retailer’s work in the local community.

“We really feel part of the Rochdale community,” Edmund said.“We’ve previously worked with Rochdale Connections Trust to help disadvantaged children in the borough and have also decided to help in another way by donating directly to the Christmas Toy Appeal.”

Maqio sells on numerous platforms and websites around the world. Talking to Toy World earlier this year, Edmund described how both Maqio and its competitors developed their digital presence over time, and how consumers quickly became far savvier in their shopping habits. “Our workforce adapted to the situation brilliantly, and at the same time our suppliers supported us well too. Without these strong relationships, we wouldn’t have seen such strong growth throughout the year,” he explained.

Edmund added: “Over the years, we’ve developed a deep understanding of the value market and we take great care not to operate in a way that would negatively affect it. Suppliers recognise that working directly with us means they retain a degree of input and we won’t kill the price – which then affects the whole market. We work differently.”

There are also office premises at the new site in Milnrow, which are five times bigger than Maqio’s existing space, meaning there is plenty of room for further growth at the successful company.

“The run-up to Christmas is a very busy time for us so we’ll have a phased transfer with a view to being fully operational from Milnrow in early 2022,” added Edmund.

Suppliers can get in contact with Maqio at maqioltd@gmail.com.