Toymaster member Osborne’s in Rushden is a family concern that has passed through the generations of the Osborne family. 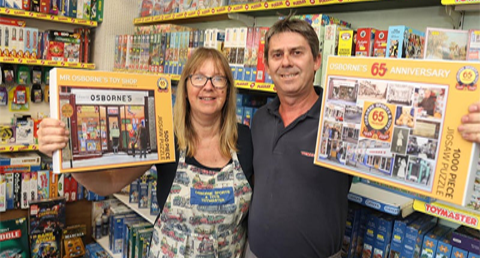 Jim Osborne opened Osborne’s Toys and Sports in Rushden’s High Street in 1955. Jim was a West Bromwich Albion football trialist at the time, but followed his mother’s advice to set up his own business. Taking over a store named The Gift Shop, Jim was attracted by the fact that it was a stockist of some of the most popular toy brands of the time, such as Meccano and Tri-ang. The shop has gone from strength to strength ever since, expanding in the 1970s to include the neighbouring corner premises.The store is now a Toymaster member.

Jim sadly passed away five years ago, but the shop is still owned by his widow Pam, who continues to do the books, and is managed by their son Will and his partner Libby Risdale.

Special 65th anniversary jigsaws have been commissioned to commemorate the milestone 65th year of trading, featuring a collage of photographs of the shop, and a painting of Jim Osborne by Rushden artist Keith Hill. The jigsaws will go on sale from Friday, with a donation from each one sold going to the local Rushden Museum.

Will explained: “Keith was one of dad’s first customers in 1955 and he remembers coming into the shop as a child. We can certainly say he’s a long-term customer.”

In 2018, the Lego group thanked the Osbornes for their brand loyalty and being the first stockist in the UK by arranging for the entire shop front to be clad with 277,500 Lego bricks for a weekend.

The 65th birthday of the shop should have taken place in May but had to be postponed due to the Covid pandemic. However, staff will mark the date alongside the five-year anniversary of the death of much-loved founder, Jim, on 31st July. Customers are invited to visit Osborne’s toy shop and help celebrate 65 years of selling toys.

Toy World would like to offer congratulations to the family on this remarkable milestone.