Paris Hilton will appear in four episodes of the hit series as the new headmistress of Pacific Coast High, starting today. 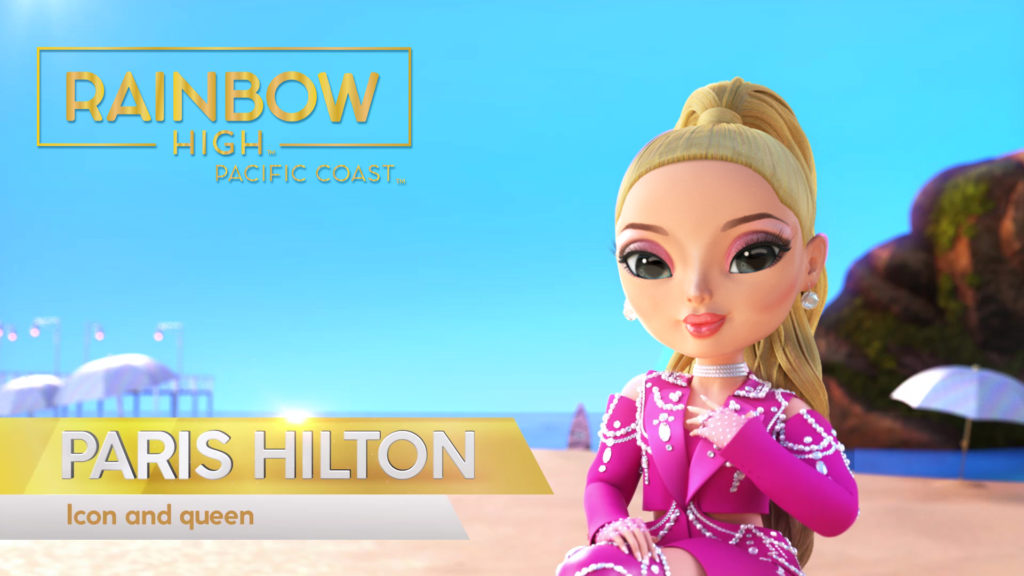 Rainbow High is thrilled to announce that entrepreneur and television personality Paris Hilton will be joining the cast of Rainbow High for four episodes. The first highly-anticipated episode will air on 25th March on YouTube. Paris will be introduced in animated form, portraying herself as the headmistress of Pacific Coast High, marking the start of a collaboration inspired by the creativity and fashion that fuel both Paris and Rainbow High.

As a long-time resident of Malibu with a notable background in unscripted television, Paris makes herself right at home, taking on the role of headmistress of Pacific Coast High, which in the series also doubles as the set of a reality TV show. In this extended episode and accompanying music video, Malibu Dreamin’, Paris will grace the west coast fine arts school with expertise in all things fashion, fun and business. Sporting a sleek embellished blazer dress, Paris will encourage the students to find inspiration and express themselves, as well as divulge all the drama. Fans might even catch some of their favourite Paris catchphrases that have defined the decade, such as: “that’s hot!”

MGA Entertainment says the collaboration’s impact is rooted in the undeniable similarities between Rainbow High and Paris Hilton; both are distinguished by their daring fashion, unapologetic individuality and commitment to confidence and self-expression.

“I love the world of animation and being a character is a really fun way to express myself,” said Paris Hilton. “I relate to the Pacific Coast students’ passion for all things bold, colourful and fashion-forward. Rainbow High is the perfect brand to start with and it’s an honour to be the headmistress in this special feature of the hit series.”

The full line of Rainbow High Pacific Coast dolls and must-have colour change pool playset is available in UK retailers now, and fans can expect to see Paris in more episodes in the coming months.

“We are proud to announce this partnership with Paris Hilton, whose bold fashion and influence have inspired today’s creative leaders,” commented CEO and founder of MGA Entertainment, Isaac Larian. “She takes chances, just like MGA. We are excited to watch fans enjoy the new headmistress in town.”

New episodes of the animated series, Rainbow High, will launch every other Friday on YouTube, and fans can also check out the season that started it all, available for streaming on Netflix.