The two special edition Volkswagen vehicles will include an individual serial number from a limited production run. 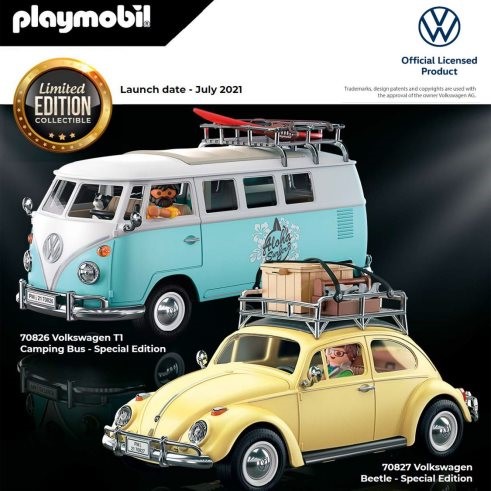 Playmobil has announced two special edition Volkswagen additions to its range for 2021. The limited edition 70826 Volkswagen T1 Camping Bus and 70827 Volkswagen Beetle will come with a fresh new look and extra features.

The new lines will be available in July, and both iconic vehicles will feature chrome effect detailing, giving a premium look and finish. Each vehicle will include an individual serial number from a limited production run, making them a must have for fans and collectors.

The original Camper Bus ‘Bulli’ from Volkswagen Commercial Vehicles and the popular VW Beetle made their debut in Playmobil form in January this year. The range immediately struck a chord with parents who knew and loved the originals in their real-life forms. The introduction of these items  opened up the kidult market to Playmobil like never before, and Playmobil has hinted that their success could herald similar partnerships in the future.

The Playmobil Volkswagen T1 Camper Van, affectionately known as the ‘Bulli’, comes fully equipped with a seating area, travel kitchen, sleeping area and plenty of storage space for adventures. Meanwhile, the VW Beetle is a true classic, and the Playmobil miniature boasts a roof rack and a host of accessories.

For more on Playmobil’s ranges for 2021, see the in depth interview which ran in the March edition of Toy World.