In a spectacular collaboration between Playmobil and ViacomCBS, the U.S.S. Enterprise will launch worldwide this September. 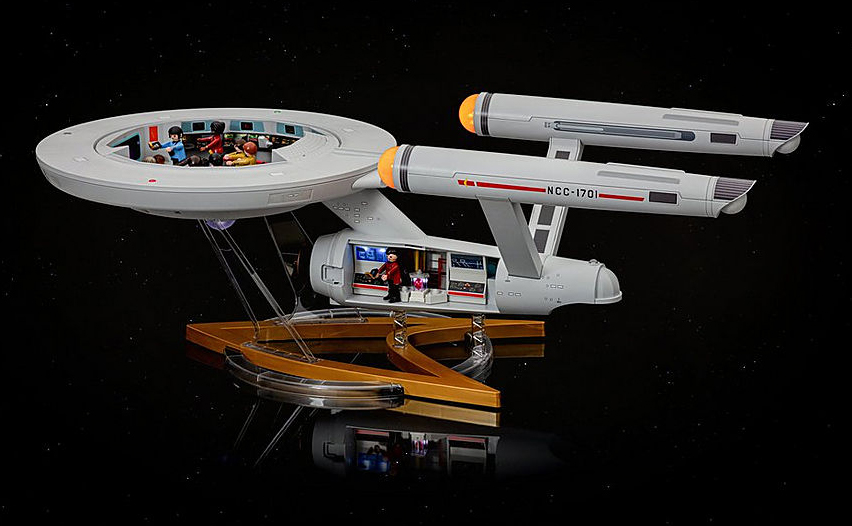 The U.S.S. Enterprise NCC-1701 and crew will see its first Playmobil release on 8th September this year, 55 years after the original premiere of Star Trek on 8th September 1966, a date which marked the start of one of the greatest global pop culture phenomena of all time.

The Star Trek universe has had an extremely successful history so far: over the generations, fans have enjoyed six classic TV series, plus five more that are currently in production, as well as 13 incredible feature films. Amongst its millions of fans, the world-famous franchise is known just as much for its mesmerising original spaceship, the U.S.S. Enterprise, as for the original crew made up of fan- favourites Kirk, Spock, McCoy, Scotty, Uhura, Sulu and Chekov.

The 70548 Star Trek – U.S.S. Enterprise sees the Star Trek universe joining forces with Playmobil, as the brand continues to extend from being an integral part of children’s play to include themes that are popular with adult fans too.

Like the Star Trek licence cooperation, the first Playmobil model of the Enterprise, has a focus on authenticity and attention to detail. In keeping with the vessel’s position as the pride of Starfleet, this metre-long Constitution-class starship comes with a host of mesmerising details and features to inspire fans, including the ship’s iconic bridge and engineering.

Specially designed mounting will ensure the legendary ship is presented in the best possible way. Lights, sounds and other technical features are included alongside a unique AR tie-in app, which will expand the authentically detailed Star Trek experience much further than just the physical product. The ship comes with a total of seven crew members from the original cast. 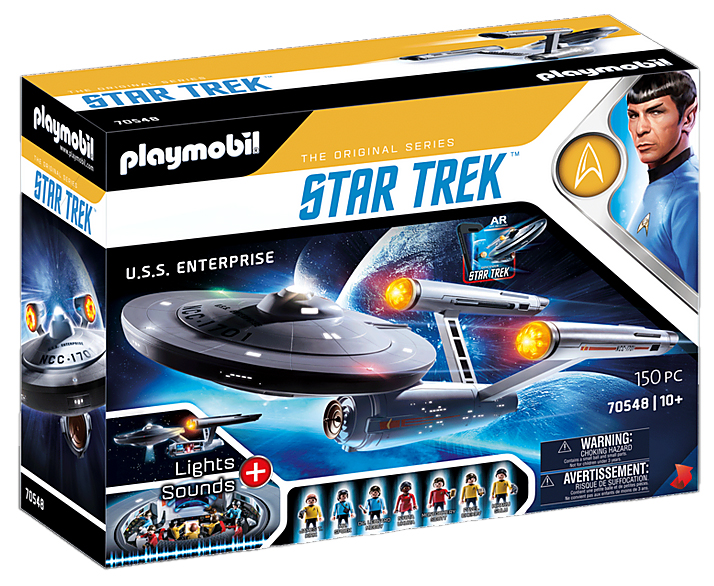 There’s a rotating chair for Captain Kirk, workstations for all crew members, a cell phone holder and storage compartment for phasers, communicator and other equipment. In the hull is the engine room with two stand-up workstations. To activate the light and sound electronics, the dilithium core must be inserted into the container and placed in the engine room. Power can be supplied via batteries or USB connection, and Captain Kirk will personally announce greetings. The buttons on the centre console on the bridge can be used to control various light and sound effects such as the warp drive, torpedo or alarm sounds.

Fans can enjoy recreating iconic scenes from the original series show, or take the U.S.S. Enterprise on new adventures. With a removable roof, the entire bridge and crew can be accessed, along with lighting effects and original sounds and dialogue from the show,

In another Playmobil first, Mr. Spock is the first figure in Playmobil history, since 1974, to have ears.

For more on the Playmobil U.S.S. Enterprise NCC-1701, boldly go to www.playmobil.co.uk/star-trek.