Screen icon James Bond’s Aston Martin DB5 launches in October, tying in nicely with the release of the latest film, No Time to Die. 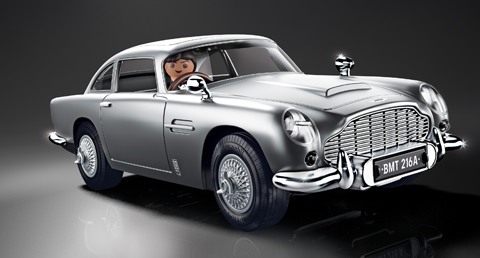 Playmobil has announced the imminent arrival of the James Bond Aston Martin DB5 – Goldfinger Edition, which arrives on shelf soon after the release of No Time to Die, the latest (and somewhat delayed) instalment in the multi-billion dollar franchise. The film had its premiere last night at London’s Royal Albert Hall, and was enthusiastically received.

In Goldfinger, the third James Bond film ever released back in 1964, Agent 007 encounters the eccentric Auric Goldfinger, aided by his loyal henchman Oddjob and numerous acolytes. Assisted by his Aston Martin DB5, designed by Q Branch, Bond manages to triumph over his adversaries, kicking off a relationship between man and machine that has since spanned a total of eight Bond films and 60 years of cinema.

Probably the most famous Bond car of them all, the DB5 is regarded as an iconic element of the franchise. Fans will instantly recognise the distinctive round headlights, eye-catching radiator grille, shapely bodywork in radiant silver and special equipment used by Bond on his top secret missions.

The James Bond Aston Martin DB5 – Goldfinger Edition from Playmobil is a worthy reproduction of its real-world vehicle, and – just like the original sports coupé – is also a picture of elegance and sophistication. In keeping with the film, the car is of course upgraded with impressive special features designed by Q Branch to aid Bond in dangerous situations. Individual parts in a chrome-effect finish, such as the bumpers and side mirrors, faithfully reproduce the look of this film icon. 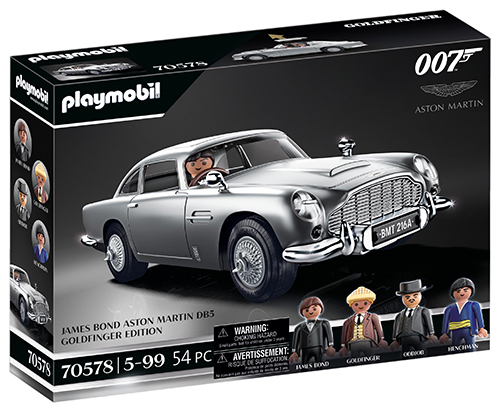 One of the highlights of the model, among many other authentic details, is the functional ejector seat triggered by pushing down the exhaust pipes. When triggered, the seat catapults Bond’s adversary upwards through the two-piece roof. Also included are triple rotating number plates, the retractable bulletproof screen behind the rear window and the extendable ramming bumpers. Four figures are also included to enhance the play potential offered by the new licensed set: 007 himself, Goldfinger, Oddjob and a henchman.

Ahead of the October release date, readers can find out more on the Playmobil social media channels. An animated trailer for the James Bond Aston Martin DB5 – Goldfinger Edition has also launched on YouTube.