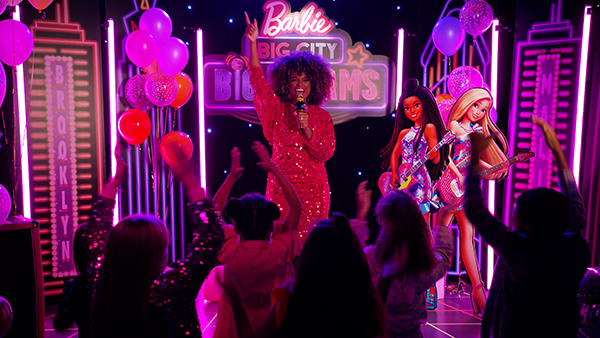 Barbie hosted its first ever virtual premiere this weekend with the help of popstar, TV host and radio DJ Fleur East.

A jam-packed event aired exclusively on the Barbie UK Facebook at 9:30am, before the brand-new musical movie debuted on Pop at 10am. The unmissable party brought the world of Barbie: Big City Big Dreams to life with special sneak peeks at the content including an intro to brand new characters, dance routines, unboxings, competition prizes up for grabs and a special musical performance by Fleur East.

Fleur, whose Top 5 hits include Sax, first came to prominence by bagging second place on X Factor. An accomplished host, she was most recently seen fronting The Void on ITV and competing in I’m A Celebrity in 2018, and will next be seen on Ant & Dec’s Saturday Night Takeaway later this year. Mattel says Fleur’s ‘luminous personality, fierce fashion and talent’ made her the perfect popstar to introduce Barbie’s newest musical movie, which champions friendship and encourages kids to follow their dreams.

Fleur said: “I’ve been a fan of Barbie ever since I can remember, and to get the chance to host Barbie’s first ever virtual premiere is a dream come true. The movie is so much fun, and I can’t wait to have a blast singing and dancing along to the amazing soundtrack with Barbie fans.”

Kelly Philp, Mattel UK marketing director, commented: “Barbie’s new adventure will introduce a brand-new co-lead and location with New York City, and to celebrate this momentous occasion we wanted to bring the bright lights of Broadway to fans all over the UK with our first ever virtual party with fun for all to enjoy. The campaign to support Barbie’s newest tentpole is truly best in class Marketing with social support, immersive events, theatrical rollout, in-store merchandising and music, toys, CP products and more to bring Barbie: Big City Big Dreams to life.”

The new movie, released nationwide in cinemas this summer, is Barbie’s biggest UK theatrical release to date. Kids can explore the world of Barbie: Big City Big Dreams with music on Spotify, through dolls and play sets inspired by the movie, and rock out with the new Just Play Barbie guitar. To support the tentpole moment, Barbie ran a 360-degree marketing campaign including product TVCs, Pop sponsorship, YouTube and social campaigns to support the new movie.