The new plush range features favourites Poppy and Branch, as well as new characters from the upcoming release. 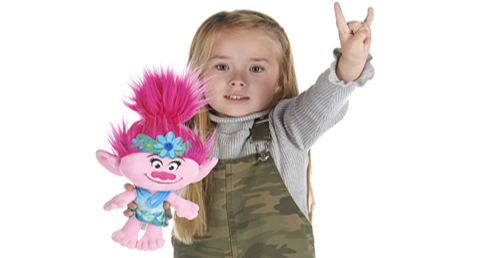 DreamWorks Animation’s Trolls World Tour officially premiers on 13th April 2020 and Posh Paws’ colourful collection of 10’’, 7’’ and 18” official movie plush toys is on sale now. All the favourite Trolls characters are included such as Poppy, Branch and Tiny Diamond, the glitter hip-hop troll, while new faces such as Queen Barb, the leader of the Rock Trolls have been added to the cast.

As with all Posh Paws products, each character is recreated in the softest of fabrics and to the highest quality, and the collection offers a variety of price points, from pocket money treats through to birthday gifts.

Lauren Shipman, group brand and marketing director, said: “We are extremely proud of our new Trolls World Tour Plush collection. DreamWorks Animation’s Trolls are incredibly popular and with the new characters, we expect this will be a standout collection for Posh Paws and our retail partners this year.”

For more information about the ranges call Posh Paws International on 01268 567317.