A survey suggests that local, independent stores are likely to benefit from permanent changes in the way customers now shop. 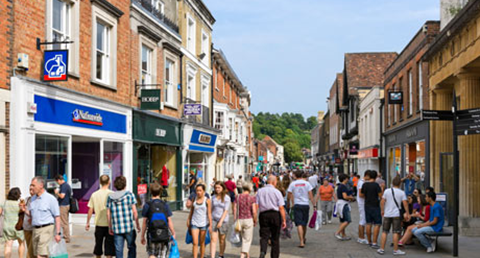 Smaller, local stores and online retailers are likely to benefit from permanent changes in shopping habits after a year of Covid-19 restrictions, according to a report one year on from the first UK lockdown.

More than nine out of 10 of people who have been shopping locally during the pandemic say they will continue to do so, according to a survey carried out by Barclaycard.

Nearly two-thirds of consumers in the UK have chosen to buy closer to home in the past year. The survey focused on grocery shopping, and showed a 63% rise in spending at specialist food and drink stores last month, however, these trends have been found to be replicated in other retail sectors as consumers realise the advantages of shopping within their local communities.

Independent stores, including toy retailers, have been boosted by the shift to working from home, as well as strengthened interest in supporting businesses that have kept communities going through hard times. This is good news for retailers located in small towns and local high streets, but may come at a cost to others, having a detrimental effect on footfall in city centres. Keeping in touch with customers via social media over lockdown, many toy indies have told us they feel they have actually strengthened bonds with their client base.

Toy retailer Andrew Olley, of City Cycle Centre in Ely, told Toy World that his customers are keen to return to the in store experience: “People are desperate to get back to shopping in physical stores, particularly children. They want to be there, look around, see the toys for themselves and make decisions about what to spend their money on in person, not through a screen.”

“People in the local area seem keen to get out,” agreed Bill Bulstrode, who owns Framlingham Toy Shop. “Our shop is a very safe place to be; masks are required, we have a foot-operated sanitiser pump at the door and numbers are limited for the safety of both staff and customers. I’m sure that, once they get used to the idea, customers will be back to check out the latest toys and simply enjoy the experience of visiting a toy store once again.”

The trend for online shopping, which has added to the pressure on high street retailers and city centres across the country in recent years, is also expected to continue. The survey found that shoppers have received an extra two deliveries a month since March 2020, an increase from an average of five before the pandemic. Half of consumers said they expect to continue with at least that number in future, and 10% expect it to increase.

Lisa Dyson, the owner of Games Crusade in Harrogate, told us: “I think a lot of customers will be very keen to return to in-person shopping, but it will also be interesting to see whether some customers have enjoyed the ease of online shopping to the extent that they want to stick with it. There will be those that want the social interaction and conversation with other people, but also those that find online shopping convenient for their own situation”

Meanwhile, retailers anxiously awaiting confirmation of an April reopening have warned that further job losses could be on the way if shops are forced to remain closed beyond April 12th. The British Retail Consortium said there were now 600,000 retail workers on furlough, up 200,000 since December, suggesting further jobs were at risk.

Helen Dickinson, chief executive of the BRC, said the situation was likely to get worse, should the third lockdown continue: “Now is the time to rebuild the economy,” she explained, in comments to The Guardian. “Retail remains the largest private sector employer in the UK, meaning the strength of the industry remains important for the economy at large. Any delays to the prime minister’s roadmap will undoubtedly result in more store closures and threaten the livelihoods of the retail workers currently furloughed.”

Toy retailers remain optimistic and can’t wait to welcome back customers. “It is good to have a date to plan for and potentially some light at the end of a very long tunnel,” said Mark Buschhaus and Stephen Barnes of Toy Barnhaus. “We are aware it could change, but having some clarity and something to work towards is good. It’s very sad to miss the second Easter in a row, but we understand it’s for the best, and it’s important to get it right this time.”