Queues outside toyshops in Scotland before Tier 4 lockdown

Queues of shoppers seeking Christmas toys formed as consumers stocked up before the latest Tier 4 lockdown comes into effect on Friday. 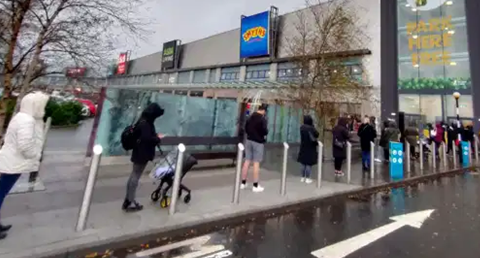 Nicola Sturgeon put large parts of Scotland on alert this week, ahead of an official announcement. Shoppers immediately reacted by turning out in force before the measures come into effect, with queues reported at Smyths Toys in Glasgow as well as crowds on Glasgow and Edinburgh’s high streets in the early part of the week.

Scotland’s latest Covid restrictions, confirmed yesterday, are to be introduced in 11 local authority council areas – including Glasgow – on Friday. The Tier 4 rules will see the closure of non-essential shops, pubs, restaurants and gyms, and will affect about 2.3m people in west and central Scotland, who will be ordered to stay home at home as much as possible, not to socialse indoors and to avoid non-essential travel. The restrictions will remain in place until 11th December. They will be imposed in East Dunbartonshire, East Renfrewshire, Glasgow, Renfrewshire and West Dunbartonshire. North. South Lanarkshire, East and South Ayrshire, Stirling and West Lothian will also move to Tier 4.

The move comes as a blow to consumers and retailers alike, with just five weeks until Christmas, however, click & collect, online services and outdoor retail, such as garden centres, outdoor markets and car lots, will be permitted to remain open. The closure period will mean that stores in affected areas will remain closed on Black Friday this year.

Paul Martin, UK Head of Retail for KPMG, said Scottish retailers were facing “a daily fight for survival”. He added: “Shifting consumer behaviour, driven by Brexit and Covid-19 uncertainty, is having an unprecedented impact on Scotland’s retail industry.
We’re just a week away from Black Friday and in the middle of the so-called ‘Golden Quarter’, when the sector typically witnesses its biggest gains.”

A Scottish Retail Consortium spokesman commented: “The scientific evidence is clear shuttering shops will do little to reduce the spread of Covid — but we can be explicit, closing stores in the crucial Christmas period could be devastating for those businesses. If shops, which all the evidence shows are safe, cannot trade throughout this period, then losing that revenue might prevent the business reopening, with direct consequences for jobs.”

CBI Scotland has called for more support for retailers: “At all levels, support must be made available from the moment any restrictions come into force, have a clear point of contact and be commensurate with their impact. Anything less, and even more businesses crucial to our recovery will go to the wall, with further job losses inevitable.”

SRC director David Lonsdale added: “Businesses which were perfectly healthy at the start of the year are now struggling with circumstances beyond their control, and the fight for survival couldn’t be more intense for some.”