Reading the room…it’s the Friday Blog!

Like all businesses, when lockdown started, we had some big decisions to take: should we mothball the business for an indefinite period, furlough all the staff and use the time to learn a new language, teach ourselves to play an instrument or read the complete works of Shakespeare? Equally, we could have just chosen to sit around all day in our boxers, watching Netflix and Disney +. Disturbing mental image aside, the decision for us was never in doubt: we were always going to carry on doing what we do, supporting the industry, keeping people up-to-date with all the latest news and developments and trying to make sense of the ever-evolving landscape. The practicalities weren’t an issue; we are fortunate enough to be able to operate our business remotely. My biggest concern was that there simply wouldn’t be enough news to report – the fear was that one day, our newsflash would essentially say “Sorry, there is no news today.” In practice, that has never even remotely been the case.

Just look at the past week: we’ve exclusively announced some major coming and goings at toy companies (Andrew Laughton announcing his resignation from MGA, former Shop Direct toy category manager Andrea Gornall joining 8th Wonder), the precarious position which European retailer Maxi Toys finds itself in, the cancellation of the postponed Las Vegas Licensing Expo and the revelation that Argos will not be printing its autumn winter catalogue this year. In addition to these major Breaking News stories, there have been many other important industry developments to report – in short, it’s been a huge week for news from the toy community, and we have been delighted to be there to help spread the word.

The Argos catalogue development certainly came as a surprise to many, although much of the feedback we received from insiders to the news suggests that those in the know realised this was going to happen sooner or later. Maybe the pandemic brought the decision forward by a couple of years, but it seems it was always on the cards. So, what now for the Argos brand under Sainsbury’s? Some believe the Argos name itself has a finite shelf life – former Argos mainstay Ian Chaplin has maintained for some while that it will disappear within the next few years. In the meantime, what impact will the loss of the catalogue have on consumers (especially kids, who have always loved going through the ‘laminated book of dreams’ to make their Christmas wish-lists) and also on Sainsbury’s marketing revenue stream – the cost to suppliers to have a strong presence in the catalogue never came cheap. I understand that Argos will still publish its popular pre-Christmas Gift Guide, but what will happen to the timing of its top 10 toys list (Argos is traditionally first out of the gate, to coincide with the catalogue launch)? It will be fascinating to see how it all pans out, and whether the catalogue will be missed more than the Sainsbury’s management assumes.

The cancellation of the Vegas show came as little surprise to most people: August was always an optimistic date to hold an event, given the ongoing virus situation, and organiser Informa has surely done the right thing in taking decisive action. All eyes now turn to domestic UK events scheduled for September and October – Autumn Fair, the rescheduled Toymaster and Play-Room shows and BLE – as well as international trips to LA in September and Hong Kong in October. There are a few encouraging signs emerging around the world: Hong Kong certainly appears to have the situation under a far greater degree of control than many countries, although on arrival, visitors must wait in a hall (which resembles a school exam room, with desks and chairs suitably spaced apart) for eight hours to receive the results of a covid-19 test administered as soon as they touch down. That’s an eight hour wait on top of a 12-13-hour flight (and not even a movie or drink and complimentary pretzels to sustain you) …. does that sound terribly appealing to you? I guess we’ll just have to wait and see what happens over the coming weeks: hopefully some of these events can take place, even though they may bear little resemblance to the way we are used to experiencing them.

Despite questions remaining over the viability of mass gatherings, elsewhere some light is beginning to appear at the end of the (very long) tunnel: sales are holding up surprisingly well during lockdown (more on this in next week’s Blog), while it seems that that UK toy shops will begin opening after June 1st, when schools are also scheduled to start operating again. Of course, there are caveats: if schools can’t even get nits under control, I am not sure how they are expected to contain a virus. And re-opening the UK won’t happen instantly: like many of you, we have already started working on our health & safety assessments for our eventual return to the office, which will have to be conducted thoroughly. The announcement of the extension of the furlough scheme will give businesses further options to factor into the mix: some companies will choose an immediate return to full operation, but I suspect many will opt for a more gradual, phased re-opening, which can be scaled up according to developing conditions.

Although, in some ways, normal service is already being resumed in some quarters: Amazon recently described its workers as ‘heroes’, but apparently they are not quite heroic enough to justify being paid an extra $2 an hour ‘danger money’ after the end of May. Nice to see Amazon ‘reading the room’ so well – all that extra turnover generated in recent weeks is obviously going to be put to far better use swelling Jeff Bezos’ coffers rather than rewarding its staff for putting their lives on the line to deliver hair clippers and other ‘essential’ items. The phrase ‘Wuhan-kers’ has been coined to describe people or companies whose behaviour during the pandemic could be called into question. I’ll leave you to decide whether that description suits Amazon – or indeed those retailers asking for 30% discount to settle outstanding invoices.

But let’s not dwell too much on the ‘Wuhan-kers’, when toy companies, retailers and – in the wider world – NHS staff, key workers and so many other people are doing such amazing, inspirational things. Artist Banksy summed it up exquisitely in his latest work of art – a whole new breed of hero is emerging: 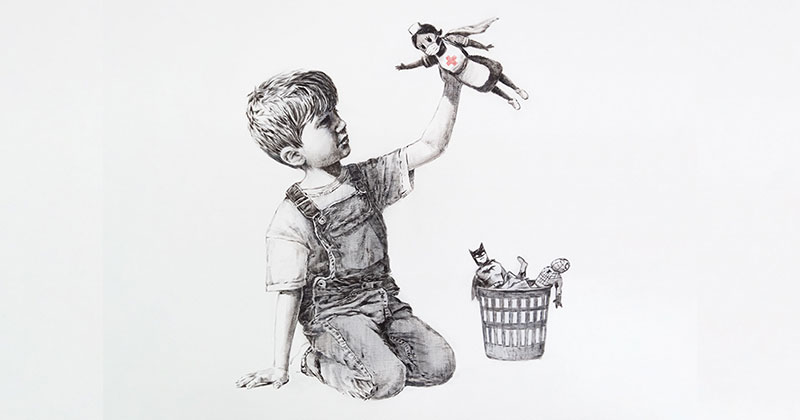