This month, Rick Derr urges indies to create their own destiny, as he concludes his trilogy of Amazon columns and looks to how independent toy retail is likely to develop. 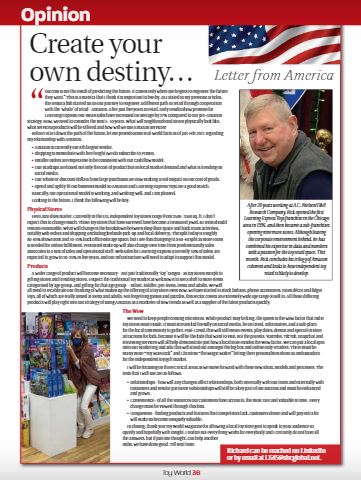 After 20 years working at A.C. Nielsen/D&B Research Company, Rick opened the first Learning Express Toys franchise in the Chicago area in 1996, and then became a sub-franchiser, opening nine more stores. Although leaving the corporate environment behind, he has combined his expertise in data and numbers with a passion for the toy retail space.

“Success is not the result of predicting the future. It comes only when one begins to engineer the future they want.” This is a mantra that Rick believes it is important to live by. As stated in his previous articles, the remora fish started us on our journey to engineer a different path in retail through cooperation with the ‘whale’ of retail – Amazon.

After just five years in retail, early results show promise for Learning Express; where mean sales have increased on average by 27% compared to the store’s pre-Amazon strategy. Rick is now looking ahead to the next 5 -10 years and what neighbourhood stores will physically look like, what services/products will be offered by independent retail and how Amazon services will be used.

Rick shares his expertise on his current working relationship with Amazon, and looks in detail at three factors that he thinks will be key to maintaining a successful partnership in the future, namely Physical Stores, Products and ‘The Wow’.

“We need to keep people coming into stores,” he writes. “While product may be king, the queen is the wow factor that indie toy stores must exude. It must scream kid friendly on social media, be on trend, informative and a safe place for the local community to gather. Post-Covid, this will still mean events, play dates, demos and special in store attractions for kids, because it will be the kids that want to visit, not the parents.”

Rick also recommends embracing the power of social media to help demonstrate just how a local store exudes the Wow factor, and suggests that retailers let their personalities shine as ambassadors for the independent toy market.

He concludes, “I realize not everything works for everybody and I certainly do not have all the answers, but if just one thought, can help another indie, we have done good.”

Read more of Rick’s insight on how independent retail can maximise its success, in the March edition of Toy World, here.