Ross has worked with top tier licences from Disney, Marvel and Teenage Mutant Ninja Turtles, as well as companies including IDW Games and CMON.

UK-based tabletop games publisher Steamforged Games has announced the hire of Ross Thompson as head of trade marketing, supporting its growing offering of board, card, miniatures and role-playing games.

Ross brings insight and experience from more than 12 years of work across the games field. With his passion for engaging marketing campaigns and dedication for strong gaming communities, he has launched numerous products across the board and built lasting experiences for players.

Ross joins Steamforged Games from Usaopoloy (AKA: The Op), where he worked with pop culture brands, communities, influencers and internal teams to promote The Op’s games. He has also worked with top tier licences from Disney, Marvel and Teenage Mutant Ninja Turtles, as well as companies including IDW Games and CMON, bringing success to their products and brands.

Toby Davies, commercial director at Steamforged Games, says: “We’re looking to take our trade relationships to the next level. As a seasoned and well-connected professional with a background in big tabletop brands, Ross is the perfect person to help make that happen. It’s a primary aim at Steamforged Games to ensure we’re supporting retailers and distributors worldwide, and bringing Ross on board will help us go above and beyond in fulfilling that commitment. I know I speak for everyone at SFG when I say we can’t wait to see what he brings to the table.” 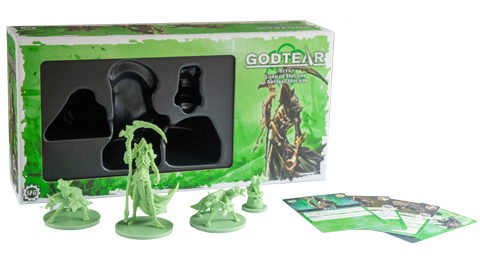 Godtear will be among the tabletop games Ross will be overseeing the trade marketing for.

Ross added: “It’s great to be joining Steamforged at this stage, with so much already achieved and so much potential still to be realised. If its releases and campaigns in the last year alone are anything to go by, there are some exciting times ahead. With games like Godtear and Epic Encounters to shout about — and no doubt some upcoming retail releases for its highly successful Kickstarter games — I can’t wait to start spreading the word to retailers around the world.”