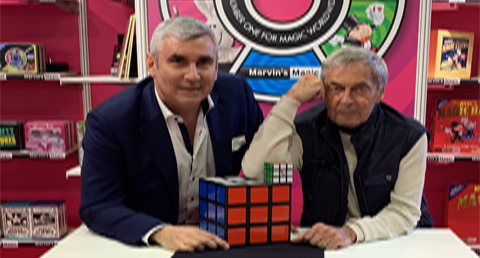 The Rubik’s Cube is celebrating its 40th anniversary and in celebration, Rubik has partnered with Marvin’s Magic to create a truly innovative magic set; Rubik’s Box of Magic Tricks. This magic collection is presented in a giant cube and contains exclusive tricks and illusions that are guaranteed to amaze, baffle and entertain. With unique Rubik’s themed magic props and instructions for 40 tricks, young magicians will be able to mysteriously predict which colours a spectator will choose, shrink and transform the special cubes and even magically perform an ‘instant solve’ in world record time.

Marvin said: “We are delighted and honoured to be partnering with Rubik. I’m proud that Marvin’s Magic has been chosen to combine its rich magical heritage with Rubik’s innovative puzzle to create this very special magic set. I was thrilled to meet up and perform our original Rubik’s magic personally to the elusive and brilliant man himself, Erno Rubik. He even signed the first edition which we will treasure. The reactions to our specially devised  Rubik’s Box of Magic Tricks have been truly  amazing and are capturing people’s imagination from all around the world.”