The company’s international revenue has also increased with a rise of double digits in the core UK market. 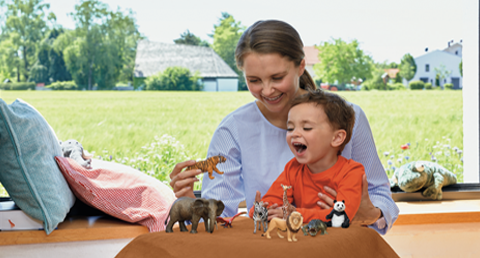 Schleich has reported a successful business year in 2019, having achieved a gross revenue of over 200m euros (compared to 183m euros the previous year), which represents an increase of around 11%. Schleich is experiencing growth that is significantly higher than the market average for the German toy industry, which was 3% in 2019. As revenue in Germany increased by double digits for the sixth year in a row,  the company’s international revenue proved even stronger than that of its domestic market, also increasing by double digits in the core markets of France and the UK.

The company’s growth is based on the success of classic Schleich figurines and the continuous expansion of the play worlds. A strong contribution to this in the past year was the bayala brand which, due to the release of the first Schleich movie, “bayala – A Magical Adventure,” saw the collection of fairies, dragons and magical creatures figurine sets and licensed products raise the brand’s name recognition and increase revenue.

Another success factor is the Horse Club thematic world. In the course of the year, three Horse Club items were included in the top 25 German toys, according to NPD figures.

The growth in Europe is backed up by the positive results achieved in the UK & Ireland. Managing director UK & Ireland, Thomas Randrup commented: “2019 saw Schleich sales rise by 56%; a remarkable achievement in a challenging market. We largely attribute this growth to the strength of our brand, ongoing product development and strong retail partnerships. Our continued uplift in marketing will also hopefully ensure Schleich’s UK’s upward trajectory in the year ahead.”

This year, Schleich plans to build on this success. Its brands will focus on further developing a global audience, to take Schleich into a new phase of international growth. There are also plans to invest in the development of online sales channels and further product innovations, and the company will push forward with digitisation in a separate strategy.

In 2020, the popular Wild Life thematic world will be an area of focus, while the Dinosaurs world will enter a new chapter, with the introduction of a brand new play world in September. Schleich will continue to release varied, extensive play sets with familiar characters and new faces, expanding its licence model and gaining new partners.

This year the company will be celebrating its 85th anniversary with a specially designed version of the classic Schleich lion to mark the occasion. The golden Anniversary Lion will be available as a limited edition from August.