Schleich is pledging to make a donation for each purchase of its Australian species figures, including the Koala and Wombat. 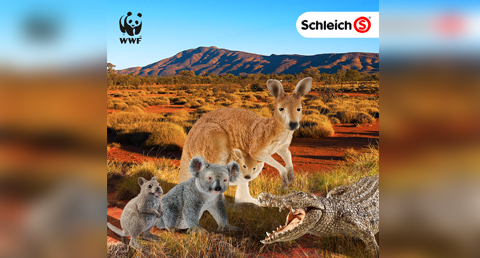 Schleich is joining the worldwide drive to raise funds for Australian wildlife with a donation for every one of five different Australian Wild Life animal figures bought from its online shop from September 2019, until the end of March 2020.

The recent bush fire crisis and the devastating effect it has had on Australian wildlife has been widely reported. Schleich is pledging to make a donation for each purchase of its Australian species figures; the Koala, Wombat, Kangaroo, Quokka and Crocodile, made from the company’s official online shops in Germany, Austria, Spain, France, US and the UK.

The donation will be made directly to the WWF (World Wildlife Fund) which directly supports Australia with saving wildlife and restoring its natural environment.

Paul Dearlove, Schleich UK’s trade marketing manager, commented: “Australia’s animals have long been part of our Schleich world and we are proud to be able to help in this small way.”

For more information about Schleich and its pledge to raise funds for Australian wildlife, click here.