Amid a tightening of lockdown rules announced yesterday, stricter rules surrounding click & collect services have been introduced in Scotland. 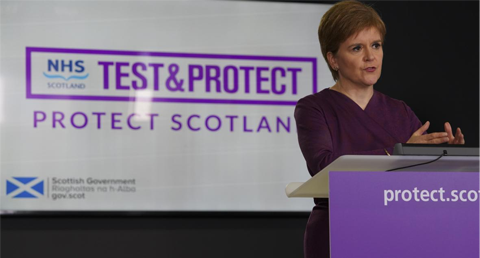 Only shops selling essential items – such as clothing, footwear, baby equipment, homeware and books – will be allowed to offer click and collect. Collections must also be outdoors, with appointments staggered to avoid queuing.

The changes are among a set of six new rules that will come into force on Saturday 16th January.

First minister Nicola Sturgeon said: “We believe that both individually and collectively these additional measures, in further reducing the interactions that allow the virus to spread, will help our essential efforts to suppress it.”

Business organisation CBI Scotland said click & collect services were often a “lifeline” for struggling small businesses amid the forced closure of all non-essential shops.
The industry body has called on the government to publish evidence to justify the tightening of restrictions.

CBI Scotland director Tracy Black said: “When well organised, click and collect services instinctively feel like a safe way for firms to keep trading. Of course, firms can choose to suspend click and collect if that makes sense for them, but for many others it could mean the difference between business survival or not.”

She added that there have also been concerns that limiting click and collect will merely encourage more people to go to supermarkets to shop instead.

Scottish Conservative group leader Ruth Davidson said business owners felt the evidence for the sudden and “unexpected” decisions had not been made clear, and asked the first minister if extra compensation would be made available to businesses who hade taken measures to make their premises Covid compliant.

Nicola Sturgeon said an evidence paper would be published to explain the “state of the pandemic” that had “underpinned” the latest restrictions, stressing that the evidence showed that when community transmission is high, it was necessary for people to minimise interactions.

UK prime minister Boris Johnson has said he has not ruled out imposing tougher lockdown rules in England. Just this week, John Lewis voluntarily decided to cease offering a click & collect service, in a move aimed at encouraging customers to stay at home during the third national lockdown.

However, the British Retail Consortium (BRC) has warned against the UK government following Scotland’s lead by introducing click-and-collect restrictions for non-essential retailers.

Tom Ironside, director of business and regulation at the BRC, said: “Click & collect is  used by a wide array of companies and allows the public to get many of the goods they need in a safe, convenient and timely manner. Retailers have implemented systems to ensure people are kept safe while queuing and collecting goods, and we have seen no evidence to suggest otherwise. Preventing people using click-and-collect services would harm the viability of many retailers, already suffering under lockdown, as well as severely limiting the choice for some consumers.”