Small US toy stores concerned for their future

Offering a US perspective on the effects of the pandemic, a report from CNN Business highlights the plight of independent toy retailers across America. 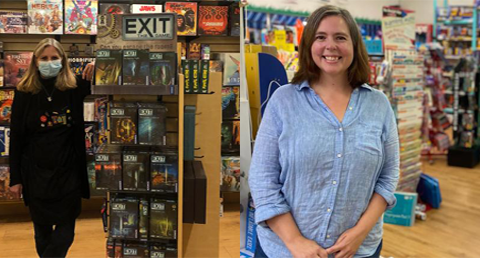 Nearly half of 1,800 independent toy store and gift boutique owners surveyed between September 19th and October 27th say they are worried that takings this holiday season will not be enough to enable them to stay in business past this year. Another 36% of respondents said that they hope to make just enough to get by.

Sales at toy, hobby and game stores dipped 26% between mid-March, when US shutdowns first began, and late October compared with the same time last year. Small toy stores’ struggles have come even as toy sales grew 19% in September. Although toys have been in high demand as parents and kids spend more time at home and look for ways to entertain themselves during the pandemic, most of the benefits are going to Amazon and big-box chains.

CNN spoke to Erin Blanton, the owner of Pufferbellies toy store in Staunton, Virginia, who said that the winter holidays are typically the busiest, and most successful, time of the year for her toyshop, with around a quarter of annual sales taking place between Thanksgiving and Christmas.

This year, Erin’s sales are constrained by restrictions on the number of customers allowed inside her shop at a time; and the lack of holiday events, usually a key sales driver, that can’t be held instore this year. Some suppliers have already warned her of delays because they can’t staff warehouses to usual levels.

Pandemic restrictions have taken a toll on small toy retailers because “they just don’t have the room to have people in [stores] with six-foot social distancing,” explained Sue Warfield, interim president of the American Specialty Toy Retailing Association, which represents more than 1,800 independent retailers and manufacturers in the toy industry.

Pufferbellies has also had to handle rising costs related to the coronavirus, including installing plexiglass barriers at cash registers, buying extra hand sanitizer and hiring an employee to enforce customer limits in the store. The business faces rising competition from Amazon and retailers such as Walmart, Target and Costco which have stayed open throughout the pandemic, even as small toy stores were forced to close in the spring.

CNN also spoke to Elle Dare, owner of Genuine Toy Company in Plymouth, Michigan, who is now concentrating on covering costs, rather than turn a profit this year. Elle stated: “If we can just pay the bills, I think that we can get through this.” She has concerns about ordering too much stock this season and holding leftover inventory, and that potential new restrictions on retailers would hurt sales further and make it impossible to pay her vendors.

Elle hopes that the struggles of independent stores will galvanize shoppers to buy local this holiday: “People are realizing that if they want their local businesses around they are going to have to support them, especially during hard times.”

Retail analyst Stephanie Wissink agrees that Amazon poses a very real threat to local toy stores, as shoppers become increasingly used to the online retailer’s breadth of range and reliable delivery options. She added that the Toys ‘R’ Us bankruptcy filing in 2017 and FAO Schwarz’s closing pushed Amazon and big box chains to build up their toy inventories to try to take those companies’ market share. Experts are agreed that this holiday season is likely to widen the gap between large chains and small toy stores even further.

For further comment on the independent toy market in the US, look out for our Letter from America column, written by Learning Express owner Rick Derr, in the upcoming December edition of Toy World.