Smart Freight system will not go into beta testing until mid-December and trials will not be completed until April. 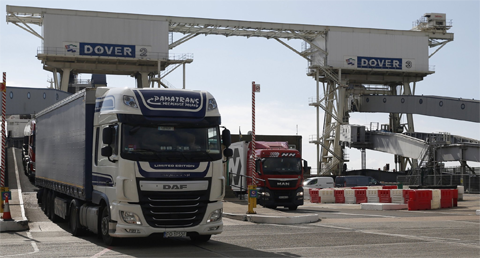 The government has told industry body Logistics UK , that the system will not be ready for January 1st, 2021. The Smart Freight System is designed to avoid congestion caused by new customs checks at key ports such as Dover when UK leaves the EU single market at the end of December.

Beta testing will commence in mid-December and will not be completed until April. The logistics industry has warned the government that forcing businesses to use a new IT system to process billions of pounds of exports before it has been fully tested has the potential for chaos.

Elizabeth de Jong, director of policy, Logistics UK commented: “To find out, with only 14 weeks to go, that there will not be a ready, workable solution for those moving goods to the EU is a massive blow to UK businesses and the economy. The government needs to understand the complexity of the UK’s highly interconnected logistics industry and the amount of co-ordination required in order to use Smart Freight, and prioritise the allocation of more resources to deliver the system on time, to protect the UK’s supply chain.”

So far, only one site, in Ashford, Kent, has been bought by the government to hold lorries in the event of congestion. The site has the capacity to house 2,000 vehicles, although a government planning document seen by the Guardian newspaper puts the figure expected to be needed at 7,000. The government reportedly has further sites under consideration.

The document confirms the extent of the challenges being faced in such a short timescale, noting that that “26 government departments and public authorities have either operational and/or policy responsibilities in relation to the border, using over 100 IT systems between them”. It adds that “currently there are legal, technical and cultural barriers hindering effective information sharing between these organisations” with an amendment in the trade bill to enable data sharing.

Lorries crossing the border from January will encounter a range of authorities with Home Office requirements on passports and visas for incoming drivers, Department for Transport checks for driver permits, HM Revenue & Customs for potential tariffs and customs declarations, and the Department for the Environment responsible for animal and food safety checks.