The message about potential toy shortages and empty festive shelves reached new heights this week when, during a visit to Singapore, US Vice President Kamala Harris spoke not about unfolding events in Afghanistan or the latest pandemic-related developments, but about impending toy shortages in the US. It may be a prime example of ‘dead cat’ media messaging, but it shows that the thorny issue which has been causing consternation throughout the toy community all year has managed to reach the very highest echelons of global power.

Back in the UK, HGV driver shortages have become headline news, with many media outlets desperately attempting to avoid using the ‘B’ word when discussing the crisis. I have made no secret of the fact that I have always been very much in the Buck Frexit camp, but even the most ardent Brexiteers must surely acknowledge that it is the ‘driving’ factor here.

If there is any upside to the ongoing supply chain tribulations, it is surely that there can’t be many consumers left who haven’t received the ‘buy early for Christmas’ message loud and clear. Hopefully toy retailers across the globe are ready and waiting to assist…

While everyone is understandably focused on Q4, many people are also starting to think about what happens after Christmas and, specifically, how Toy Fair Season ’22 is shaping up. Yes, we have come around to that stage again – at this point last year, I am sure many people thought this would all be well and truly behind us by now. On the positive side, there has certainly been progress on a local level – several shows are set to take place next month here in the UK, and there have been sporadic events across the globe in recent months, albeit predominantly ones which serve a domestic rather than international audience.

We have been having numerous ‘behind the scenes’ conversations with show organisers, and we will endeavour to keep everyone updated as and when there is firm news to share. One of the biggest challenges is to separate the fact from the fiction, the reality from the rumour – there has been a lot of ‘some bloke says’ information doing the rounds, and I suspect some of it may be quite wide of the mark. That said, if the past year has taught us anything, it is that we are in an ever-evolving situation, and statements about what may happen in six months’ – or even six weeks’ – time come with a host of caveats.

Some clues have begun to emerge: this week, we have sadly seen the Distoy event cancelled, with organiser David Potter unfortunately forced to concede defeat, as a result of insurmountable international travel complications. I also wrote a piece about the current state of play in Hong Kong, after someone told me they had heard it would all be ‘opening up in time for the October show’. I have no idea where this person’s source heard this, but it seemed to run counter to literally everything I have read and been told by a host of (well-connected) people – so I thought I should at least share what information I had. Of course, global Covid-strategy remains completely fluid, and there could yet be significant revisions at relatively short notice. Like many of you, I genuinely hope things change in time to allow a trip in January to take place. But right now, from what I can see, the portents are not exactly encouraging…

There is better news from Germany, where I gather the authorities have announced that for trade fair participants, quarantine regulations don’t apply for up to five days, providing they can provide a negative test result. This is very good news for visitors; however, it does potentially give international exhibitors a dilemma – Nuremberg Toy Fair (Spielwarenmesse) runs for five days, plus there is build up and break down to factor in. Five days wouldn’t cover that, so would they have to deploy two separate teams – one for the first half of the show and one for the second? Would that be feasible for smaller companies? We’ll keep you posted on that conundrum and possible solutions, should that rule still be in place come January.

Shows like the London Toy Fair are also in a stronger position, as the core visitor profile has always been predominantly domestic. However, all fairs – whether international or domestic – would undoubtedly benefit from the ‘corporates’ relaxing their own internal travel restrictions. Whether retailers, toy companies or licensing companies, there does appear to still be a split between SME’s, many of which have returned to their offices and are open to travel and visit customers, and larger organisations, where many are still adopting a cautious policy. It will be interesting to see what prompts a change in approach; will it be date-related or data-related? Will everything change when ’21 ends and ’22 begins – or are there specific conditions which need to be met before HR gives the green light for a return to normality?

As a close-knit community, I do believe there is a strong desire to meet up again en masse – not to mention the fact that the process of selling and buying of toys is far more effective in person, rather than being conducted digitally. That isn’t to say that digital presentations don’t have a place – they have been a hugely valuable lifeline over the past 18 months.  However, face to face meetings, trade shows and buying trips work on a completely different level, and I am sure we are all looking forward to their return.

The closeness of the toy community was typified by the reaction to the loss of a couple of industry stalwarts over the past week – independent retailer Philip Goodall and sales veteran Stuart Crawford. Both were hugely well-liked and respected by their friends and colleagues across the toy trade. I was also sad to hear that Russell Dever, owner of Those Licensing People, passed away earlier this month. Events like this touch the whole community, and I can certainly sense that everyone wants the chance to come together to remember those we have lost. I also think it will be a great opportunity to celebrate the fact that, as an industry, we’ve made it through the past 18 months relatively unscathed, and to thank customers for their support and partnership, which has been pivotal in helping the industry to collectively navigate the challenges of the past year. Hopefully, we will all get the chance to do that very soon.

In the meantime, here is a picture of The Pope with his new fußball table – even major religious figures love their toys! 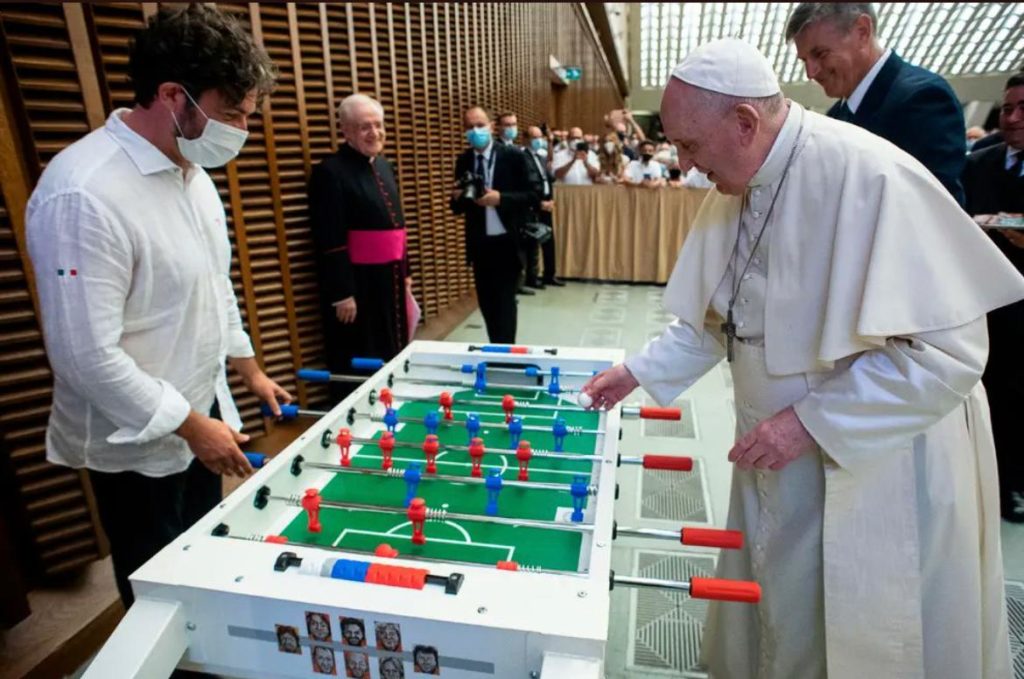