A giant model of Mr Spock has been beamed into Osborne’s Sports & Toys in Rushden to mark the launch of Star Trek Playmobil. 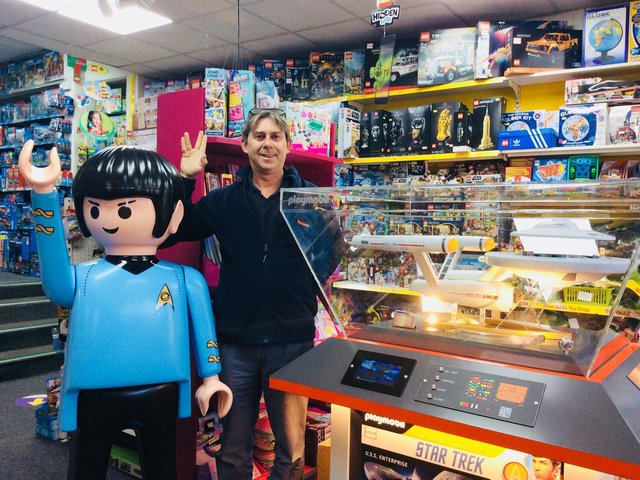 The independent retailer, run by Will and Libby Osborne, has been chosen as the launch pad for one of the latest releases from Playmobil: Star Trek’s USS Enterprise playset.

A giant model of half human, half Vulcan Mr Spock has arrived in store, where customers can also view a model of the USS Enterprise. Osborne’s was proud to be selected as the only independent venue to display the new set; the only other place where the public can currently see it on display is at Hamleys in London. The Spock figure is also expected to be a draw in its own right, at over 5ft tall.

Store manager and owner Will Osborne told the Northamptonshire Telegraph: “It’s fantastic for the Star Trek fans to get the opportunity to see the new playset and meet Mr Spock. He’s the first Playmobil figure to be produced with ears – and these ones are, of course, pointy.”

Clearly impressed with the USS Enterprise set, Will went on to explain: “The play set is over a metre long and opens out so you can put the crew figures inside. There are buttons that light up and make all the sounds – the alerts, phasers, everything a Star Trek fan and Playmobil collectors would want.”

Aimed at adults and children the Playmobil 70548 Star Trek USS Enterprise NCC-1701 play set measures an impressive 1m long and 45cm wide. ‘Communicators’ (smart phones or tablets) can be uses to control the lights and sound via an app.

A Playmobil team installed the impressive play set in the shop. As it was so large, the decision was taken to display it inside the shop rather than in the window. Mr Spock is also inside the store, ready for selfies with fans.

Will added: “Star Trek is still on TV, 50 years after it first aired, and William Shatner just went into space – there’s a real appetite for Star Trek at the moment. It’s a very special toy and should be a real hit with Star Trek fans.”

Osborne’s Toys and Sports was previously chosen by Lego in 2018 to be given a brick makeover for the brand’s 60th anniversary.

Visitors are welcome to see the model at Osborne’s over the next two weeks.

For more on the Playmobil U.S.S. Enterprise NCC-1701, boldly go to www.playmobil.co.uk/star-trek.