Geomagworld MD Clive Wooster says the walk has so far raised around £25,000 for brain tumour charity Brainstrust, with money still coming in.

A giant ‘seagull’ helped draw in extra donations for an annual toy trade backed walk in aid of a charity which supports brain tumour sufferers and their families.

Clive Wooster, MD of Geomagworld, says the costume sported by one of the participants of the Follow the Seagulls walk on the Isle of Wight last weekend had passing well-wishers flocking to boost the total for the Brainstrust ramble, with donations currently standing at an incredible £25,000.

“Now in its 11th year, this year’s total so far is even better than those raised by previous walks,” said Clive. “We would like to thank all those who generously donated to the Brainstrust charity.”

Last weekend’s walk – which was originally planned for April but had to be rescheduled to the 11th and 12th September due to the pandemic – saw 24 participants take on the 52-mile trek around the Isle of Wight. The first leg of 27 miles takes place from Cowes to Ventnor, while the second one, from Ventnor to Yarmouth, covers 25 miles. This year, all the starters – some of whom are suffering from brain tumours – managed to finish the walk, which Clive said is unusual.

“The 52-mile walk was completed in two days with stunning sea views and stunningly sore feet, but it was done,” he told Toy World. “The walkers all had their own reasons for undertaking this feat, none more so than one participant who walked in the hot sun, dressed as a seagull.” 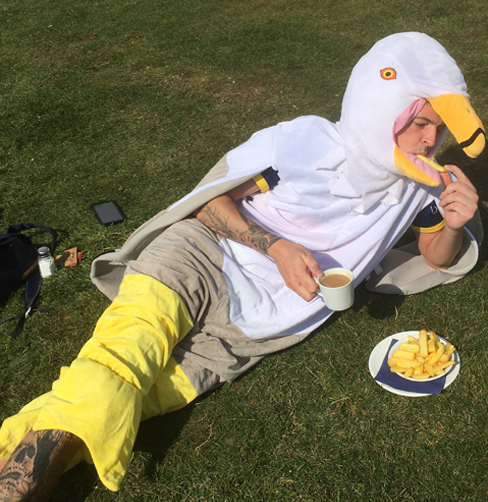 The annual Isle of Wight walk has also prompted the Brainstrust to hold three other versions off the walk which take place in Fife, Whitby and Dartmouth.

“We decided to expand it, because it worked so well,” explained Clive.

Clive started the walk with a friend in 2010, covering the 75 miles around the Isle of Wight in three days and raising £200.

“We have come quite a way since then both in terms of participants and the amount we raise,” said Clive. “We get a lot of toy trade support and some of the big retailers have been very generous.”

Next year’s event is already being planned for April. To find out more about the Brainstrust, which is based on the Isle of Wight, please click here.