ParcelHero predicts the end of seasonal peaks for home delivery.

Despite the reopening of the majority of high street stores in June, the UK courier service ParcelHero has said demand for home deliveries has now become evergreen, with seasonal peaks and troughs looking to be a thing of the past.

ParcelHero’s head of consumer research, David Jinks MILT, explains: “Contrary to many analysts’ expectations, parcel deliveries and e-commerce sales have continued to climb in July even though most non-essential stores reopened on 15th June. ParcelHero has seen no sign of any decline in deliveries so far this month and is still experiencing Christmas + level volumes.”

He adds, “Online sales are booming. Growth Intelligence says over 85,000 businesses launched online during lockdown and its loosening has done little to halt demand. In fact, there is strong evidence that the reopening of many high street stores actually boosted online sales. According to the online retailers’ association IMRG/Capgemini, multichannel retailers ‘recorded the highest online growth ever’ during the week when physical retailers reopened their doors.”

This result, according to David, is not surprising given the consistent demand for online services. Indeed, A&M/Retail Economics estimates that 17.2m British consumers have made changes to the way they shop. David adds those who see the risk of Covid-19 to be very high are “almost four times more likely to have shifted their shopping habits for the long-term.”

David concludes, “At the beginning of lockdown, the front door became the front line in the fight against Covid-19. Britain’s new online shopping habit is one that most consumers, especially older shoppers who have ventured online for the first time, may be reluctant to kick any time soon.”

Games are back in the news this week, and not just because they’re still selling incredibly well. No, this time it’s because the government has turned to heritage gaming for inspiration on how to defeat coronavirus. Rather than complex strategising and scenario planning long into the night, it appears that our illustrious unelected leader, super spore caster Dom, and his mate Boris Johnson have been holding their own Hasbro Games Night at Number 10 instead. That would certainly explain the photo on the front of last week’s Sunday Mail – Johnson wasn’t doing press-ups, he was playing Twister (beer belly: red, green, yellow and blue). Their game-playing shenanigans have also given rise to the UK’s new virus response strategy – now officially referred to in Parliament by its no-longer secret code name, Whack-a-Mole. If Hasbro isn’t working on a special limited edition ‘2020 coronavirus edition’ of the original game as we speak, I would be truly amazed. Rumour has it the pair also played obscure board game ‘Escape from New York’, but adapted it for the modern era by renaming it ‘Escape from Leicester.’ Maybe other government policies will be based on D&B’s Games Night in future – instead of pay rises, maybe all NHS staff could be given a game of Operation instead? And let’s just hope that no one gives them a copy of Risk or who knows where we’ll end up?

Back in the real world, the virus continue to play havoc with our old routines – both Autumn Fair and Comic Con have officially been cancelled this week, as organisers grapple with the realities of putting on trade and consumer shows in the current climate. I’m sure it is technically feasible with an awful lot of planning and a raft of safety measures, but as one sanguine show organiser said to me recently: “Just because you can do something, doesn’t mean you should.” Indeed.

Some may even feel that sentiment could apply to the re-opening of pubs, bars, restaurants and other businesses this weekend, especially after recent developments in the USA. But looking at the move more optimistically, it will hopefully bring even more people back out into towns and cities, giving an additional boost to retailers. From what I am hearing, re-opening has generally gone pretty well – value sales shot up in the first week, and while that trend hasn’t been sustained in week two, some indies have told me that they’ve seen footfall pick up a bit this week, so maybe consumers have been favouring local High Streets over bigger destinations? In the first week, I understand that all supercategories were in growth for the first time since lockdown, even collectibles – anecdotally, it seems that kids are keen to spend the pocket money they’ve been saving up for the past 100 days.

However, despite the fact that the toy market continues to perform solidly, it is also inescapable that the wider retail channel and other parts of the UK economy are in for a pretty rough ride. The past couple of weeks has seen host of redundancies and store closures being announced: last week, we reported that Very Group would be losing over 100 people from its head office team, while this week saw John Lewis chairman Sharon Lewis warn of the impending closure of an unspecified number of stores, together with one London office. Details of which stores are for the chop will be revealed in July, at which point we’ll get an idea of how many job losses will follow. We already know the answer to that question at Harrods, where 700 roles – 1 in 7 of the workforce – will be disappearing. Overall, over 12,000 jobs in the retail and aviation industries were lost in just two days this week – incredibly sad and if this trend continues after the furlough scheme ends, it will surely curtail the speed and strength of economic recovery.

Thankfully, not all UK retailers are in the doldrums – far from it in fact. B&M saw its revenue rise by over 33% in its first quarter, while sales at Argos rose by over 10% over the same period, aided by a 78% rise in home deliveries, with toys cited as one of the key category drivers. Given how well toy sales have fared in general, we can but hope that this will restrict the number of job losses in our own market. However, there is a hard truth here: the government’s furlough scheme was incredibly generous and has undoubtedly saved many companies from going under in the short term. But it didn’t differentiate between businesses which have a long-term future and those which, frankly, don’t. I understand why means testing the furlough scheme would have been physically impossible given the time frame, but it did mean that millions of pounds were spent propping up zombie businesses, merely delaying the inevitable (we can see that in our own little corner of the media world…). Ultimately, the fallout from the pandemic is likely to result in the mother of all zombie business clear-outs – but I genuinely believe that we don’t actually have that many of those left in the toy market anymore, so we may yet escape relatively unscathed compared to many other sectors. Let us hope that proves to be the case.

One person whose current role has come to an end is Groupon trading director David Ripley, who left the business earlier this week. David will be in the market for a new challenge from 1st October and has told me that he would love for that to be in toys. However, in the meantime, he is keen to use his garden leave productively to support toy-related charities or not for profit toy organisations over the next three months, giving something back to the industry he has been a part of for so long. He can be reached at DavidJMRipley@Gmail.com or on 07738 999210 if you have a project or idea you’d like him to consider.

Before I go, if you’re looking for some uplifting reading for the weekend, may I recommend the special July ‘ 2020 reboot’ issue of Toy World? The physical copy is now arriving through letterboxes, but you can read the digital edition here. On so many levels, this strange and unpredictable year starts now, and this edition fires the starting gun on the all-important second half of the year, celebrating the fresh start that awaits the toy community. Enjoy!

For now, we’re all starting to get our heads around what post-lockdown life looks like in the short term. One picture which has been doing the rounds on social media this week caught my eye: is this what next year’s Toy Fairs might look like? If so, I for one can’t wait… 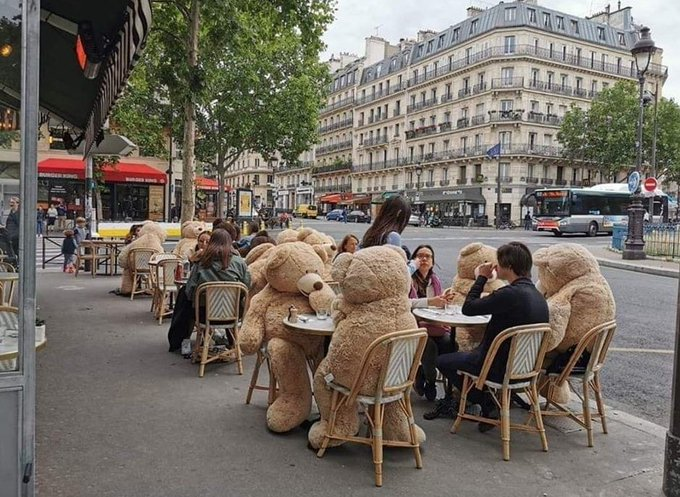