The Crew – Quest for Planet 9 from Thames & Kosmos was announced as the winner of this prestigious award yesterday. 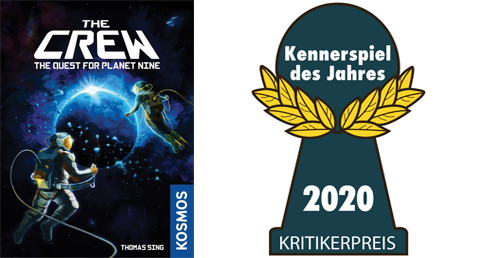 It was announced in May that Thames & Kosmos UK had received two nominations from the Spiel des Jahres Committee for The Crew and My City. Kosmos Games UK is now pleased to announce that The Crew – Quest for Planet 9 has won the coveted Kennerspiel des Jahres Award 2020.

The Crew has received rave reviews since its debut at Essen 2019. Initially a sleeper hit, word of the innovative co-operative trick taking game spread throughout the gaming world and led to Kosmos UK selling out of the English language version within less than nine days of its arrival in February. Since being reprinted and arriving back in the UK in mid-April, the game has sold over 8500 copies in the UK alone.

In order to meet demand and satisfy the gaming community, five free bonus missions – The Deimos Adventure – were devised and released on social media in a joint marketing campaign with Kosmos-Verlag and Thames & Kosmos US. The game is also under development as a digital entity and will be released in time for UK Games Expo in August.