The bumper January issue of Toy World is out now

The biggest ever January issue of Toy World is now landing with a resounding thump on desks and doormats across the country, and you can read it online here. 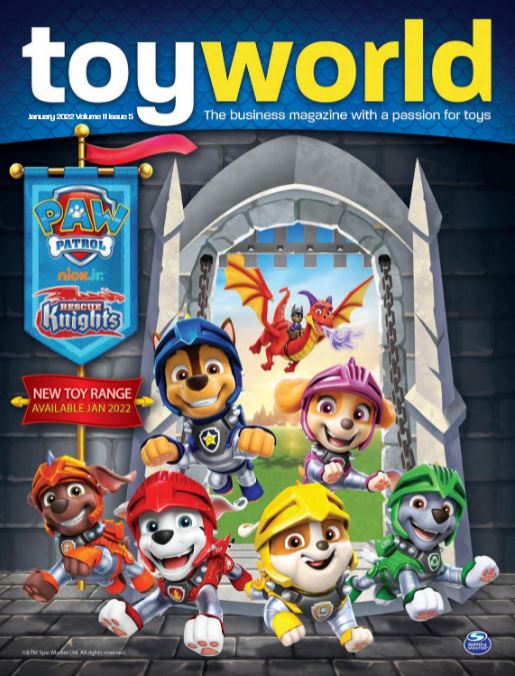 The whopping 360-page January issue of Toy World (AKA: The Big One) is out now, loaded with the latest news and views, exclusive articles and opinion pieces, comprehensive overviews of major upcoming trade shows and much, much more.

Anne-Marie Edwards and Nicole Sweeney from the online department store Very spoke to Toy World about how the company approaches the toy category and what it offers its suppliers and customers, while Toymaster’s development manager, Brian McLaughlin, outlines what membership of the buying group offers independent retailers, from access to its branded and themed window programme to its standout central invoicing system. Toy World also spoke to no less than 15 independent retailers about the rollercoaster of retail for our regular feature, Talking Shop.

Mattel, meanwhile, provides a look back over the past 12 months, as marketing director Kelly Philp and vice president and country manager Michael Hick discuss the strengths of Barbie and Hot Wheels, the challenges inherent in shipping and pricing, and why the marketing landscape continues to evolve. Bildo, which manufactures its toys in Greece, details its rise from small domestic toy supplier to international name with some of the biggest kids licences in its portfolio, and Haico – which started just as the pandemic did – explains how the trials of the past two years have paradoxically helped its entry into the toy market.

Toy World’s assistant editor, Sam Giltrow, helpfully summarises the findings of a fascinating shipping webinar, co-organised by Toy World, the British Toy and Hobby Association (BTHA) and Toy Industries of Europe (TIE), which featured input from two experts in the field of logistics. TIE also addresses the Power of Play in its exclusive article, explaining how the organisation, of which the BTHA is a member, works to celebrate toy makers with its annual Play for Change Awards.

The NPD Group looks at data from the final weeks of 2021, while Generation Media invites readers to step into the metaverse and Learning Express’ Rick Derr tells readers why he’s excited for a new year of selling toys. Matthew Thorpe, global account manager/business development manager at MTS, also shares the latest from the world of toy safety as we enter a new year (and a new phase of Brexit) and Tristan Brooks, head of Client Services and managing partner at Havas Entertainment, examines the key themes in advertising for the months ahead.

Of course, the January issue of Toy World wouldn’t be the bumper read you all know and love without its unbeatable, in-depth look at London Toy Fair, which this year makes its highly anticipated return to Olympia after being forced to skip 2021. In addition to the biggest ever section dedicated to the products that will be on show (and what makes them great), David Mordecai, CEO of One for Fun (formerly known as H. Grossman/Tobar) tells Toy World editor Rachael Simpson-Jones why the time is right for a rebrand and what this means for the company’s customers. Rachael also spoke to Just Play’s Anna Chapman, VP marketing EMEA, and David Allmark, executive advisor, to find out about the company’s official January 2022 launch and why Toy Fair will provide the ultimate launch platform. We also spoke to Nazneen Yasin, founder of Fabula Toys, about the role Toy Fair played in inspiring her traditional toy company, and caught up with Jawares’ Holly Oldham and Jonny Taylor about the company’s 25th anniversary year. This issue also contains a major feature in which big names from across the industry ‘Look Ahead’ to what 2022 might bring.

If this weren’t enough, the January 2022 issue of Toy World also contains Part 2 of our Spielwarenmesse preview, a look at the hottest kids TV and film properties, plus the latest  licensing, marketing and appointment news and John Baulch’s popular column, Allegedly.

You can read the January issue here.

We hope you enjoy reading the January issue of Toy World as much as the team enjoyed putting it together. Don’t forget, Toy World will be at Toy Fair on Stand B23 – do pay us a visit if you’d like to find out more about the UK’s leading toy trade publication and how you can be a part of it.