The July edition of Toy World is out now

The packed July issue of Toy World is available to read online and print copies are landing on doorsteps now. 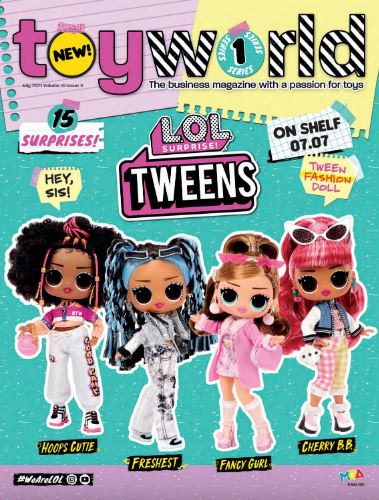 We have another fantastic issue for you this month, with comprehensive features on Construction, Tech Toys, Dress Up/Role Play and Stationery products.

There’s a special article commemorating The Entertainer’s 40th anniversary, where Gary Grant tells us how the still-growing business first began, with a host of delightful old photos of members of the Grant family to enjoy.

Another exclusive article introduces the new Just Play UK operation, as the team behind the new European subsidiary assembles and readies for an official January 2022 launch.

An interview with MGA’s UK & Ireland MD Neil Bandtock finds out how the company’s plans are proceeding, six months after he took on the role.

In the July issue, you’ll also read one of the most forthright Viewpoint articles we have ever published, by Wicked Uncle’s Liam O’Shea, who looks at how suppliers communicate news about price increases (or not).

There’s an interview with Generation Media’s Lisa Morgan on how the current media landscape is evolving and Import Services brings us up to date on Delamode International Logistics’ new £23m extension to its distribution centre at Southampton container port.

And of course, this issue also contains all our regular features, including News, Industry Moves, Licensing World, Marketing World, Fresh and Allegedly.

You can read the July issue of Toy World online here.