The June issue of Toy World is available to read online and is landing on doorsteps now. 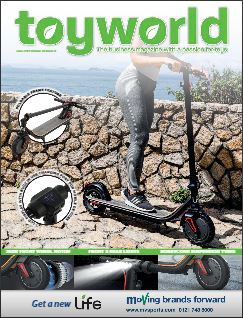 The 148-page June issue of Toy World is out now, and is available to read online.

Alongside comprehensive features on wheeled toys, infant toys, and arts & crafts products, this issue deep dives into the growing kidult market for the first time, asking what defines a kidult toy, and how retailers can carve out a successful corner of the category for themselves.

Konami, the company behind the Yu-Gi-Oh! TCG, tells Rachael Simpson-Jones what the collectible trading card game offers stockists, and how tournaments and social events form an intrinsic part of the property’s wider ecosystem, while Richard North, CEO of Wow! Stuff, takes readers behind the scenes to discover the ‘how behind the wow’ in this personal and upfront interview. We also take a quick look at Import Services’ new £24m distribution hub – look out for an in-depth piece in the July issue.

Alongside regular contributors The NPD Group (which has provided a special additional piece on the kidult market), Toy Barnhaus, Generation Media and Rick Derr, Nick Gibbs-McNeil examines how the connection between entertainment and the kidult market has shifted during the pandemic, and Asha Bhalsod asks if an Amazon hybrid model is the best of both worlds.

And of course, this issue also contains all our regular features, including News, Industry Moves, Licensing World, Marketing World, Fresh and Allegedly.

You can read the June issue of Toy World online here.

The team is now working on the July issue of Toy World, which will contain features on construction toys, tech toys, dress up & role-play, and stationery. With a publication date of early July, anyone wanting to be involved should get in touch with the team ASAP. The editorial deadline is 3rd June, while the ad deadline is the 15th June.

For advertising enquiries, contact Mark Austin on 07710 532952 or mark@toyworldmag.co.uk.