The room where it happened…it’s the Friday Blog!

What an incredible week. After a gap year that seemed like an eternity at times, the London Toy Fair returned…with a bang! The energy, the positivity, the delight at seeing old friends and colleagues, the fun of meeting new people for the first time and the joy at finally being able to see product in the flesh again all made for an uplifting event.

Maybe there are people out there who prefer to present toys on zoom. Maybe there are buyers who would rather evaluate and assess new lines digitally. It’s just that I have yet to meet anyone from either group.

Of course, despite the fact that it was the only major toy show able to take place this year, there were still no guarantees that it would be a success. Would people actually come? Would it be strange wearing a mask all day – would that make it feel a bit awkward and impersonal? Would HR teams prevent certain major buyers from attending? Would it all be a bit of an anti-climax?

I am absolutely delighted to say – with hand on heart – that the reverse was true. There was a palpable, electric buzz that no amount of masks could kill. Buyers seem to have triumphed over their HR departments; teams from the majors were out in force, while numerous indies also made the trip. There was also a welcome bonus as many international attendees came along, not just from all parts of Europe as we had perhaps anticipated, but from further afield too. I liked the tale of two South American visitors who couldn’t speak a word of English, who were so keen to see new ranges after the New York show was cancelled that they made the trip and relied on the international language of toys being enough. I gather there would have been even more international attendees if the Nuremberg show had been called off earlier; by the time it was confirmed, it was too late for visitors from places like Russia and other countries to obtain the necessary visas.

Sadly, not everyone could make it. Some chose not to attend, including a few notable Irish and Scottish retailers, however, the Smyths and Ken Black teams were out in force. You have to respect the decision of those who decided not to visit. Others had no say in the matter: there were a few ‘eve of show’ covid cases, including one of the UK toy community’s leading retail figures, who first attended the show in the same year I made my debut. Meanwhile another broke his ankle after falling off a ladder in his warehouse days beforehand. I know that they will both have been absolutely gutted to have missed out.

Naturally, there were differences this time round; fewer media – especially influencers and their kids – seemed the right decision to me. There were almost certainly fewer non-retail visitors too; the number of packaging reps and logistics people was understandably down. This year of all years, the ‘quality not quantity’ mantra is what mattered. The need to restrict the numbers on stands to maintain safe distancing meant that the last thing anyone needed was hordes of kids running around being a bit of a nuisance. And I am not surprised that the logistics community decided it might be wise to keep their heads down for a year.

The rebalancing in who attended seemed to refocus everyone on the products on display. Very few companies were offering previews last autumn winter, and with no Hong Kong show, this was the first time most of us had seen the new lines in real life. All of the conversations I had with retailers revolved around what we had seen (straight after affirming how delighted we all were to be there, of course) – and there were some fantastic new launches on show. Far too many to list here, but we are all looking forward to bringing you more details over the coming months.

It was a shame that the winners of the Toy of the Year and Retailer of the Year Awards weren’t able to be presented with their trophies at an event, but in all of the chaos leading up to the show, I can completely understand why the BTHA chose to err on the side of caution. Indeed, despite calls from certain quarters to call the show off, I am delighted that everyone involved kept calm and held their nerve. The show ran incredibly smoothly, with neither the Olympia renovation work nor the pandemic impacting on anyone’s experience at the fair, beyond the occasional mild inconvenience. So, congratulations to the whole BTHA team for pulling it off with aplomb. It was nice to see the Spielwarenmesse management team even managed to make it over this year – I hope they liked what they saw.

Thanks to everyone who made time in their busy schedules to see the Toy World team at the fair – it was lovely sitting at dinner each night listening to our team talk about who they had met and what they had seen that day. With no Hong Kong, Nuremberg and New York shows this year, we only had one chance to see everyone, and as retailers, media companies and everyone else was in the same boat, it must have been a herculean effort for exhibitors to make sure everyone got a chance to get a stand tour. I was still talking to one client at 5.20 yesterday, and next to us his sales team were still in deep conversation with a retailer – we all needed every last minute to get the most out of the show. Unfortunately, I suspect that the sheer volume of people wanting to get on stands (especially those without an appointment) might have meant a few were unable to be accommodated, but it can’t have been easy to squeeze everyone in.

The UK toy market may not have matched the giddy heights of the US market last year, but it was still 2% up on 2019 and given everything the toy community had to cope with – from lockdowns to logistics nightmares – it was a creditable performance. Let’s hope for more of the same this year.

After today’s newsflash lands, the Toy World team is all off to lie down in a darkened room to recover from the whirlwind of a week we’ve had. Our feet are aching and our voices are shot to pieces, but we loved every minute. PR guru Julie Pitilla and I were even ‘ambushed with cake’ by the lovely BTHA team to recognize our 40th Toy Fair – or was it in fact my 41st? I am still waiting for Sue Gray to tell me if I was there in 1981, but let’s put it down as an accounting query for now.

For once in a blue moon, my birthday doesn’t fall during either the London or Nuremberg Toy Fair – and as it’s a ‘big’ birthday today, I am taking a rare day off. The mountain of follow up from the show starts on Monday. For now, we are just going to reflect on a tremendous week when we were just all so delighted to be in the room where it happened. Have a great weekend all. 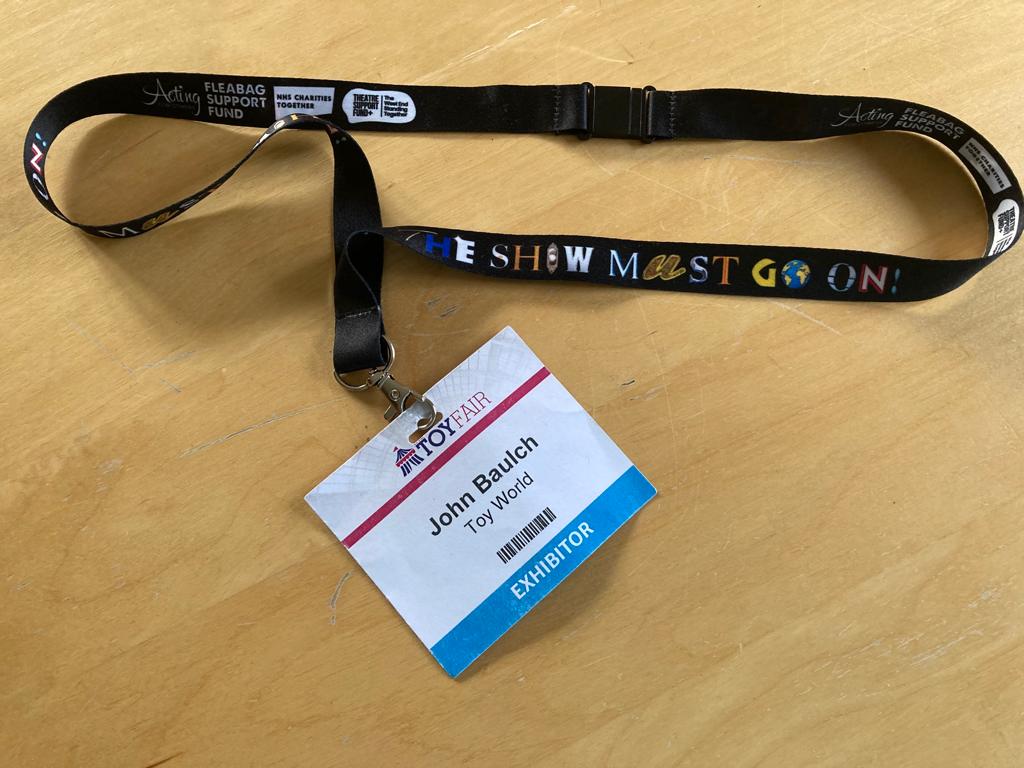