ICYMI – This too shall pass …it’s the Friday Blog!

In case you were too busy or not working last Friday, here’s the first Blog of 2021 for your enjoyment.

A belated Happy New Year to you all. I hope everyone had a peaceful, relaxing Christmas; after last year, I suspect we all needed (and deserved) that. Batteries fully recharged, I was ready and raring to throw myself back into the fray – and then came the PM’s ‘back to black’ announcement. Lockdown 3.0 – here we go again.

Speaking to a selection of retailers and suppliers earlier this week, there was a sense of inevitability and stoicism about the whole situation. It is understandable that there is considerable frustration at this latest turn of events, but also a realisation that it was completely unavoidable. It feels like we have been playing snakes and ladders and we’ve just slid back 50 places to the first square.

But the only thing to do now is look ahead. This too shall pass – in time. There is little point on dwelling too much on the next 6-7 weeks; thank goodness January and February aren’t big toy sales months. Imagine if this had happened at the start of November…

As The Entertainer’s Gary Grant pointed out when we spoke on Monday, Easter is the next crucial period for toy sales, so let’s hope stores will be able to open fully again by then. In the meantime, as long as the UK government doesn’t ban click and collect orders (as the Northern Irish government already has) or home deliveries, specialist toy retailers can continue to tick over. Those retailers who don’t have a strong website or social media presence will surely use the time to enhance or develop their digital offering. As Toymaster’s Paul Reader said, the indies are going to need all the energy and enthusiasm they can muster…but thankfully they are an energetic and enthusiastic bunch. Just don’t mention garden centres, B&M or Tesco to them and it will be fine…

This lockdown will be different in many respects. It comes straight after Christmas, when kids received a sackful of toys, which parents will remind them of when they say they are bored. We won’t all be out in our gardens like we were last March and April. And, of course, the traditional January bounce from kids spending the money and vouchers they received for Christmas may be harder to secure.

But here we are, and once again, we’re going to need to work together as a community to get through this. Hopefully, the larger retailers will help to support the supplier base by paying their invoices promptly: wouldn’t it be lovely if those retailers which have benefitted hugely from the current trading conditions – Amazon, Argos, the supermarkets, B&M etc – would acknowledge their good fortune by undertaking to pay suppliers promptly in the coming weeks, to help alleviate the inevitable cash-flow challenges they are going to face, especially smaller suppliers. Just a thought…

Retailers will be looking closely at their short-term order book, factoring in carry over from Christmas, and assessing which products they expect be in demand over the coming weeks. The fact that schools are closed, together with the likelihood of more digital rather than in-store purchasing, is likely to result in a change in which items will sell. No-one wants a warehouse or stockroom full of toys sitting there for eight weeks, but equally with schools out once again, kids will need to be kept amused and entertained, so there will be oportunities.

There are other factors playing into this delicate balancing act: in particular, sky-high container rates are causing a few headaches for suppliers and retailers alike. Hopefully it’s just a short-term blip, but if it continues it will inevitably start to have an impact on prices – few can swallow the additional costs for any length of time, but conversely some products may not sell if their price is hiked. High cube, low value items are particularly at risk.

There is also likely to be some disruption to factory service from China over the next few months: it appears that the Chinese New Year holiday is going to last longer this year, as the government has ordered factories to stagger workers’ return home. Some workers are apparently already heading off, meaning that CNY could turn into almost a 2-month break for some this year.

Brexit also remains an unknown quantity. The last-minute skin-of-the-teeth deal may have spared us from the nightmare ‘no deal’ scenario many were braced for, but I am not convinced we’re fully out of the woods just yet. Kent may not have turned into Queue Gardens, but that could be because many EU businesses and hauliers are avoiding the UK until they have sussed the lie of the land. There has also been grumbling about a mountain of new red tape and lorries getting stuck between the UK and Norther Ireland. Let’s hope these are just teething issues rather than long-term obstructions to smooth business with our nearest and largest trading bloc.

In many respects, 2021 has started where 2020 left off. But we’ve been here before; we’re older and wiser and we know what to expect. The toy market overcame the prevailing retail malaise last year, and I genuinely have every confidence that it will do so again this year. If you want a litmus test of how confident the toy community is feeling, I present exhibit A for the defence: the January issue of Toy World, which landed on desks and through reinforced letterboxes this week (Please note that if you didn’t reinforce your letter box, we can’t be held responsible for any damage the postman caused trying to force it through). If you are one of our many digital readers, you can view the digital issue here: grab a coffee and hunker down. You may be here a while, so it’s probably best to bring snacks too. It was a gargantuan effort by the team, but we couldn’t have done it without the abiding positivity and remarkable resilience of the toy community. A huge thanks to every company which continued to support us in such unpredictable times.

Earlier this week, I posted a picture on LinkedIn and Facebook, featuring one of my Christmas presents from my wife: a ‘Toy Fair 2021 Substitute Night Out Kit’, featuring beer and snacks from the countries I sadly won’t be visiting this month. The posts got a huge amount of traction and engagement – the toy community is clearly missing the shows and trips. But they’ll be back – maybe later this year, maybe not until 2022 (as is the case with the New York Toy Fair, which was confirmed yesterday) …but they will be back. Until then, to all our industry friends and colleagues in Hong Kong, Yung Sin/ Gan Bei / Cheers! (German/ American beer and London Gin will also be taken at the appropriate time). 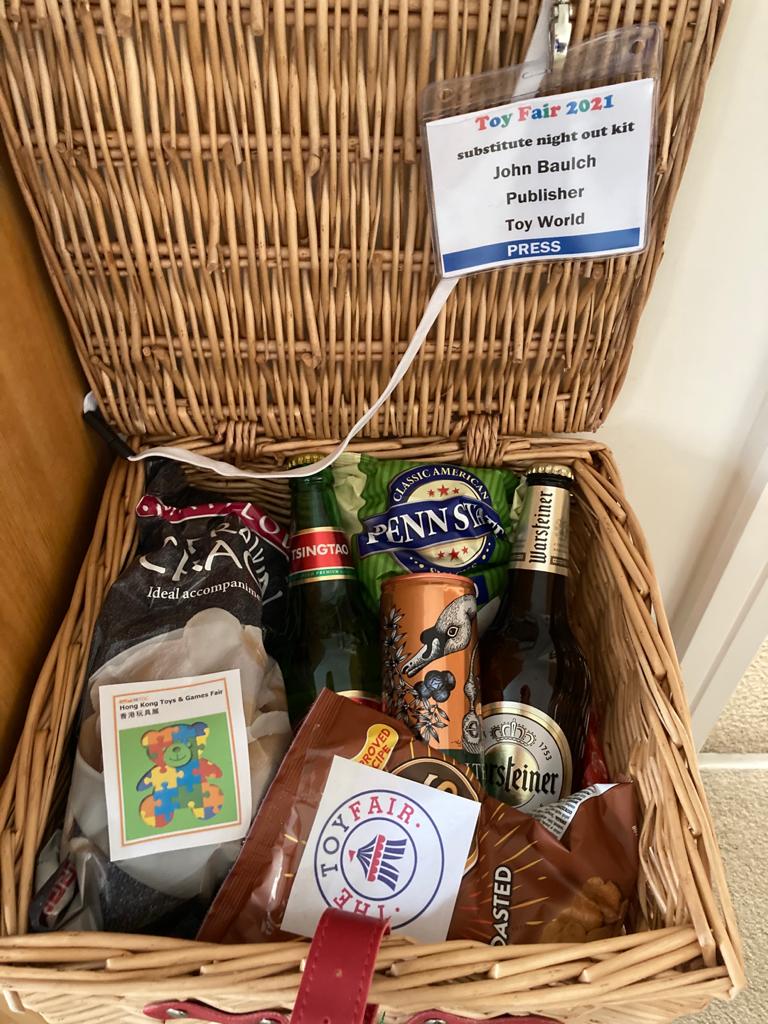