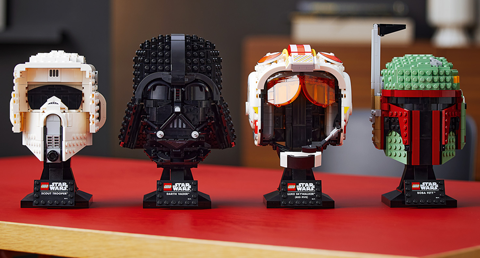 Those enticed by the dark side can show their loyalty to the Imperial Remnant with the Lego Star Wars Dark Trooper helmet. The model recreates the contours of the helmet in Lego style and uses a combination of translucent red Lego elements and white bricks to recreate the Dark Trooper’s shining red eyes.

The latest designs follow the Lego Star Wars AT-AT set, which was released in November.

This Lego model of the gigantic vehicle, used at the Battle of Hoth in Star Wars: The Empire Strikes Back, features 6,785 pieces, a movable head, spinning guns, adjustable legs and side panels that open to reveal detailed interiors.

The set comes with nine minifigures and accessories, including Luke Skywalker – along with a wire so fans can recreate the scene of him swinging from an AT-AT’s underside in an attempt to thwart the Empire’s attack – General Veers, two AT-AT drivers, a Snowtrooper Commander and four Snowtrooper minifigures, as well as two speeder bikes and an E-Web cannon set of accessories, plus plenty of interactive elements and Easter eggs. Ideal for display or action, the set can also fit an army of Snowtrooper minifigures inside – 40 in total.