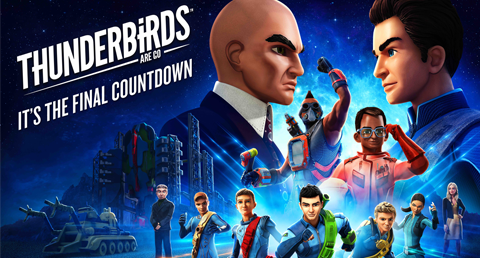 The Season 3 finale of Thunderbirds Are Go saw the iconic Tracy brothers rescue their missing father, winning CITV a 53% increase in audience share amongst the show’s target viewers – boys aged 4-9 years – and +25% amongst children in general.

The campaign, which also included widespread media coverage for the new voiceover cast and episodes, ensured Thunderbirds Are Go 3C averaged the highest volume share for a children’s Saturday morning title, over eight weeks, amongst boys aged 4-9 years and children. Viewing peaked on 15th February, with 184k children aged 4-15 years tuning in to watch the season’s penultimate episode, The Long Reach (part one).

Christina Lima, VP of Global Franchise Management and Creative Services, commented: “Thunderbirds Are Go is one of the most popular shows on CITV and we wanted to bring a new wave of boys aged 4-9 years to ITV and CITV Saturday morning programming. The show’s exciting climax and big-name cast helped this and Highlight PR’s high impact YouTube stunt and integrated PR and social activity also contributed significantly to driving tune-in. The results were impressive, and we are all very pleased with the campaign and the audience it attracted.”

Alison Vellacott, director at Highlight PR, added: “We had six weeks to develop and deliver the thrust of this campaign ahead of the new episodes’ drop, also competing against the Christmas white-out. Unperturbed by these constraints, the team focused all tactical activity on reconnecting parents and children with the show, which resulted in the spectacular audience uplift.”